On Monday I gave the wreckers in Lawson a call to ask if they’d have time to fit in the fuel pump. Unfortunately they forgot about it and asked me to call them back on Wednesday. I guess if you’re more laid back than an Aussie you’re gonna fall over.

As I wasn’t too sure if they’d do it on Wednesday I asked the mechanic next door for a quote for fitting in the part from the wrecker. I was told it would take about two hours and cost $180 to fit the pump in. Obviously that’s heaps expensive as the wrecker would charge $200 for the pump and fitting and towing.

Thus today I called Lawson again and they told me they’d have time to do the repair. Some weeks ago I joined the RAA (SA automotive club) and am entitled to free roadside assistance and towing. I asked them to tow me to Lawson but within a city towing is only free for up to 8km. Paying for the additional km was still cheaper ($30) than have the wrecker come out and tow me ($60).

We got some of our gear out the car, pushed it from the backyard to the street (good thing we’re staying at a backpackers with enough young guys around) and at 10am the car was on the tow truck. Less than half an hour later we arrived at the wreckers and got the car of the truck. 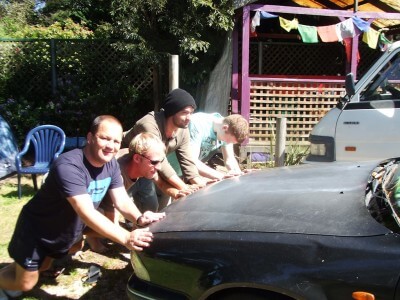 That’s about 15-20 minutes of work where a mechanic suggested two hours. I paid them $150 and now have a running car again.

With a car that age (and mileage) it’s always a question on whether to do repairs. But even though the car doesn’t look pretty at all it seems to be in good mechanical shape. We didn’t have a single problem on the last 5000km and the engine hasn’t burned any oil as well. Which in my opinion is quite remarkable for an engine that has done 290,000km. The guys who reconditioned it probably did a good job.

Now we have to think about where to spend Christmas. Hiro came to Katoomba on Monday as there was no work for her in Melbourne and the city was kind of driving her crazy. Maybe we’ll just stick around here.