Upon arrival in Melbourne I remembered how driving a car in Sydney and Brisbane was and decided to not do that to myself again. I left the car in a residential neighbourhood half an hour outside the city and took a train into the CBD. Didn’t regret that decision.

Melbourne struck me as more relaxed than Sydney even though they are of a similar size (about 4m citizens). There is a lot of nice old buildings in the city and every now and then an antique tram or horse carriage drives down the road. 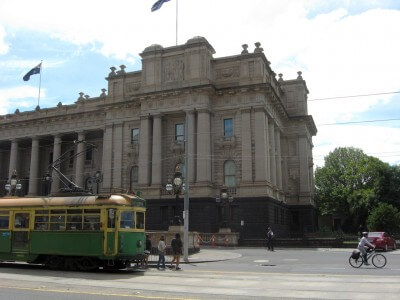 The hostel I stayed at was definitely the worst I ever laid eyes on. A huge three story complex, smelly and with a lot of weird people. They had signs in the stairway asking people not to take a wee there – probably for a reason.

I spent as little time as possible there and rather had a look around the city. One thing I had to see was AC/DC Lane, a tiny street named after the famous band. And like the band it was just filthy and worn out. Very nice. 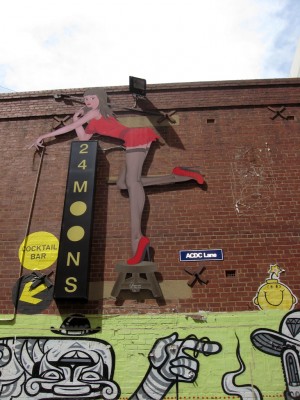 Getting around in Melbourne is fairly easy as a free tram line circles around the CBD. That came in handy when I organised the trip to Adelaide on Saturday and had to meet some people. I had put an ad on gumtree, an Aussie website where people can offer anything from an old TV to ride shares, saying I was going to Adelaide on Sunday and was looking for people to come along and share costs with.

The replies I got were interesting to say the least. People asking me if they could join me on the trip to Perth, people asking if we could just leave a week later and the odd 18 year old German guys wanting to party day and night. Not my favourite company.

Finally I found a German gal who was able to read and speak in whole sentences and we agreed upon hitting the road some time around noon the next day. After that was settled I spent the rest of the day exploring the city. 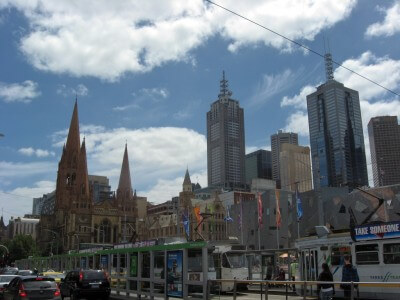 When I arrived at the hostel in the evening I popped into the kitchen to grab some water and heard somebody calling my name. I turned around and saw Pete and Meri. They arrived a week earlier and scored a bar job in some night club. We went out later that night to catch up and have a game of pool. So far Pete is still the only backpacker able to consistently beat me at the game – always a pleasure to watch him play. Funny how things go, there is dozens of hostels in the city and you still run into people you know.