Thursday, November 25th. Usually I’m not a big fan of zoos but today we went to visit the Koala sanctuary nearby Brisbane. It is more than 120 years old and currently home for 130 koalas. Besides the koalas they show other animals, most of them Australian.

We started with the lorikeets. They are not held captive in the zoo but live in the trees throughout the area and twice a day it’s feeding time for them. The keepers hand out trays with food and visitors can hold them up and be eye to eye with the birds. 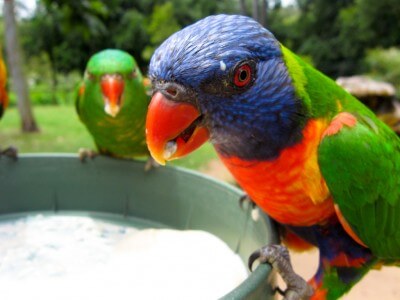 Even on my head they were sitting. There was about 40-50 of them and every time a kid was running towards the group they escaped at once just to return to the food a minute later.

After the lorikeet feeding we went to the kangaroo area. The area is completely open and we could feed and pet the roos. 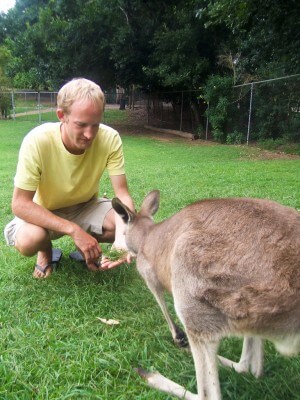 I really liked that “in between” feeling. It’s much better than just seeing the animals behind a fence. Next on the schedule was the birds of prey show. The keepers present the birds and make them fly over the visitors heads. Just the small owls though, not the eagles.

The koalas, main attraction of the sanctuary, are spread out over the whole place. There’s a place for bachelors, for mothers with kids, a retirement home and much more. For a couple of dollars every visitor can cuddle a koala and have his picture taken. The list of celebrities who did that in the last decades includes names like the pope, the queen, Eric Clapton and Marilyn Manson. 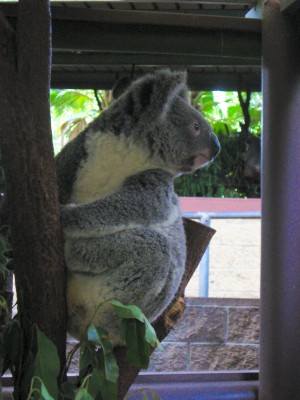 We finished our stay with a visit to a place called “tails and talons”, the reptile house. Among others they show the inland taipan there. 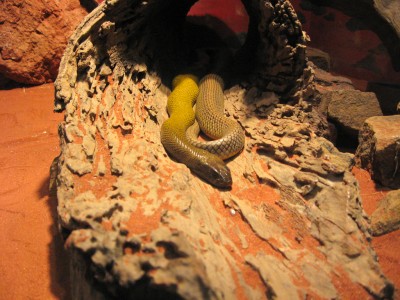 That snake is about 200-400 times as toxic as a rattle snake. A few milligram of its venom are sufficient to kill a grown adult which makes it the most venomous snake in the world. And of course it calls Australia its home. Fortunately it only lives in remote areas and attacks only if threatened. Hope I’ll never see that one in the wilderness.

When we arrived at the sanctuary in the morning we planned to stay for two or three hours. We left seven hours later and still had to find a place to sleep. That turned out to be really difficult as the caravan parks we saw were already closed and didn’t accept late arrivals.

After an hour or two of driving around we decided to take advantage of the station wagon and headed for the next car park with public facilities to sleep in the car. We found a spot near a ferry harbour but weren’t sure if overnight stays were permitted.

Some cops came across and always keen on getting in contact with the locals I asked them if sleeping in the car would be alright. “Well, you’re not supposed to but if you keep to the far end of the park it should be alright.” they told me. And so we slept in the car for the first time. A bit small but actually more comfortable than the tent!