After returning from the waterfall it was time to prepare dinner. It was very interesting to give Samart a hand with that and see how a hand full of garlic, chillies and some fish turn into a tasty paste.

Us couchsurfers were also introduced to ‘holy water’, blessed by the monks and with a spirit within. Actually it’s just the distillate of rice, chillies and herbs and is produced by the villagers. The stuff is surprisingly good and with 50 Baht for half a litre you can’t really complain.

The next morning I woke up rather early and went to give Samart and his workers a hand in the garden. The guys are from nearby villages, mostly the Karen hill tribe, and funny, easy-going guys. I’m usually not a big fan of garden work and the Thai climate didn’t make it any more fun.

When the job was done, the guys prepared a little snack: fried crickets. They don’t taste too bad, basically like whatever they were fried in (chilli paste in this case). Saying no is not an option in Thailand, you work together, you eat together. 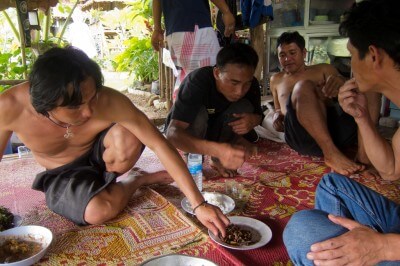 My fellow couchsurfers wanted to hit the tourist trail in the afternoon and go bamboo rafting and elephant riding. Samart recommended to come along and so I did.

The bamboo rafting probably came up when the locals needed to transport bamboo down a river and one day they took some tourists along for the ride. We got life jackets and manned three of the rafts. The rafting was really good fun, the rainy season made the river fast flowing and the drivers of the rafts did their best to sink the other rafts. Just for fun of course but I ended up taking a swim two or three times. 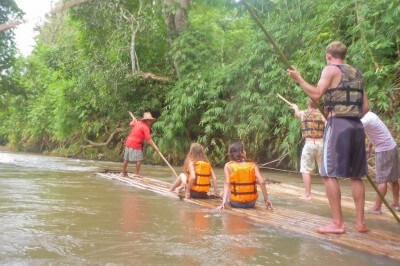 Next stop was the elephant camp and each of us got on an elephant together with a mahout (elephant driver). We headed down the river bank and into the water. Here the mahouts gave us the ‘front seats’ and the real fun started. Elephants apparently like water and they dive under, they jump around and the whole thing was more a rodeo than a riding. 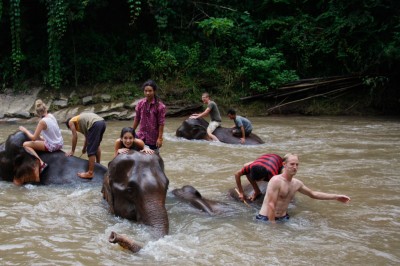 We spent about ten minutes in the water before we continued into the jungle. That part of the trip was much slower as our elephants had a major interest in all the edible green stuff but not so much in going forward. We came across a clearance after a while and could see the cloud-covered mountains over the lush green jungle. Seeing that while sitting on an elephant is pretty awesome.

Our day ended with more amazing food, holy water and relaxing in the kitchen/living room area. The whole day was well laid out and it’s easy to see that Samart is a pro, used to keeping groups of people entertained. 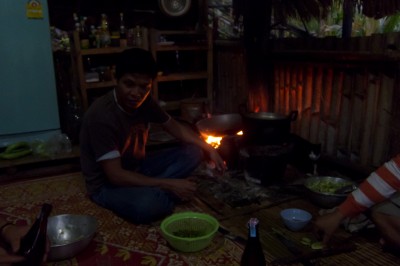