Safety is still a big issue when travelling in developing countries. When I told people I was going to Cambodia, I was asked “Are you sure that’s safe to do?” more than once.

By my experience people think mostly about diseases and crimes when they think about safety in developing countries. It is an important point but needs to be considered in relation. The intentional homicide rate in Thailand for example is six times as high as in western Europe. Yet so it is in the USA – countries like Brazil or Russia are even worse. Never have I heard about a tourist being murdered in Thailand (although it certainly happens) and one’s possessions are at a far bigger risk than one’s life.

What people seldom think about, is the differences in infrastructure. People assume that an ambulance is as readily available as in their home countries and that public transportation is subject to the same safety standards. Road safety standards are far worse than in western countries though and many backpackers push it by choosing the cheapest transport operators there are.

Last year three British teenagers died when one of the dreaded Khao San Road buses on the way to Chiang Mai crashed. These buses are very convenient to catch and cheaper than the regular companies – a ticket with a more decent company like NCA costs 2-3 times as much and you still have to manage to get to the bus station yourself. Yet a short research on the internet brings up numerous warnings about the KSR buses and the threats to health and property they bring.

A working common sense and doing some research already make SEA much safer. Not only when it comes to being on the road but also when it comes to food safety. With a little bit of experience, finding a proper place to get food is not difficult. In fact, simply going where most of the locals go is already a good idea.

There is no absolute certainty though, by far not. I do a lot of research and I still get the worst ride of my life in Vietnam and end up on a bus with a broken steering in Laos. And at that time it was merely a fortunate coincidence that the road was bordered by a cliff that went up and not down. Having need for the emergency department of a hospital sucks in every country but the hospital in Vientiane looked like one of the last places you’d want to end up in. 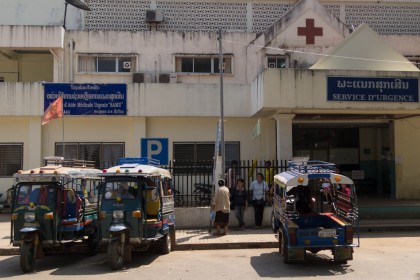 Once again things should be considered in relation. In total I spent something like half a year in SEA and I got food poisoning once and was involved in a single traffic accident – both incidents leaving me completely unharmed. Had I been travelling through Europe for half a year, I’m sure something would have happened as well.

Southeast Asia is an amazing place to see and to be in. The time I spent there changed me and my view on life for good. I would recommend going there to everybody – just always make sure to keep your brain switched on.