On Saturday AJ, Sean and me went for a little off-road action near the farm. AJ took his 4WD, Sean manned the quad and I gave AJs dirt bike a try. I never sat on one before and never drove a motorcycle off the road. Well I did once but that didn’t end well.

With our colourful group we headed down to the river where a crossing leads to the more remote parts of the farms land. I got the bike across the water but ended up with dripping wet boots. 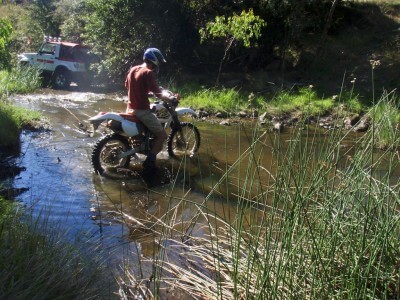 The lightweight 250 cc bike behaves quite differently compared to my 600 cc street bike but in the end it’s still a motorcycle and after a bit of warming up I had a lot of fun driving around on the fields.

There is other forms of entertainment on the farm as well. One of them involves a cow and a crazy Swiss/Irish guy attempting to ride it. Have a look at Sean’s attempt at catching the cow.

He didn’t manage to get it but was still keen on riding it. Thus the next night when everybody was more than slightly intoxicated we headed out to the paddock to find that cow. We did find it and Sean tried hard to get on its back but that’s really difficult on a pitch black paddock.

Even though he’s still unsuccessful it was worth watching. Four drunken guys chasing a cow across a paddock sure is a hilarious sight.