This morning Susan left for a couple of weeks of holiday in France. The farm is now in backpacker hand, mostly in Ben’s who already spent more than five months here and is in charge of everything now. While it might sound like endless partying all day and night, it is not.

The three Frenchies are as boring as a white carpet. They hardly ever chat and if I wanted them to drink a beer I’d have to force it down their throats. Fortunately AJ is still around, he’s definitely the funniest plumber I ever met. He’s working all day though and only on the farm in the evenings.

During the day I mostly work alone as Sean left the farm a couple of days ago. I tried working with Victor, one of the Frenchies, but he is – in Susan’s words – a lazy little shit and has a strange animosity to using his brain. That makes working with him a major pain in the ass and I decided to do the work on my own.

We already had our first casualty. Just hours after Susan left we found one of the dogs to be suspiciously immobile. Heaps of flies and a disgusting smell confirmed our concerns that he’s a goner. Hope it’s not going on like that, otherwise the farm will be a cemetery within days. For now we put that dead dog in the freezer, gotta take him to the vet tomorrow for an autopsy.

Other parts of Australia are having way more severe trouble at the moment. Poor Queensland is about to be hit by what’s considered to be the strongest cyclone (category 5) in Aussie history. Not even a month after the devastating floods this is going to be much worse. The satellite images show a storm the size of Queensland. 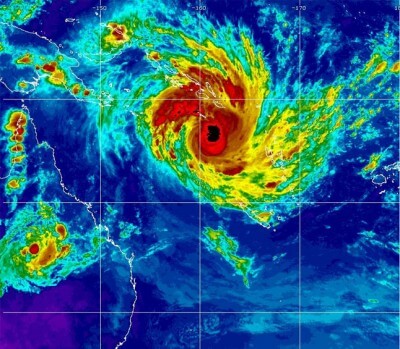 The news predict winds as strong as 280 km/h and waves up to 12m high to hit the coast of North Queensland at 10pm. Residents are told to stay at home  and prepare to be without energy, supplies and emergency services for up to twelve days.

Two days ago I talked to Andy and he told me that the supermarket shelves were empty and people were taping up the windows of their homes. I’m really glad I’m not in Cairns anymore, they already evacuated 30,000 people.