Ok, that came a bit earlier than expected. Thought I wouldn’t be back in Germany before some time 2016…

Leaving Jerusalem went smoothly this morning. The shared taxi picked me up right in front of the hostel and after a little sightseeing tour across the city, dropped me off at Terminal 1.

Pre-Checkin-Security was curious about my Moroccan entry stamp but didn’t bother with asking me any questions about my stay in Israel. Fine with me, less need to lie. The official slaps the usual sticker with a number on my passport. Mine starts with 5, meaning I’m suspicious but there’s no need to search my body cavities. 6 is the worst and reserved for Muslims and anybody else who’s skin is a bit too dark.

At luggage check I’m taken aside after the x-ray and another official inspects my carry-on bag in detail. Swiping for explosives’ residue, the works.

When everybody has boarded the plane, there is a delay and a couple of minutes later, a passenger is lead off the plane for “security reasons”. Poor bastard.

The flight itself is calm and we arrive in Berlin before the time. It’s the new airport, or at least its runway. Our captain announces that it’ll take us about 15 minutes (sic!) to taxi to the gate. Driving past the new terminal building, he jokes about the “Berlin Acropolis” and how one day it’ll hopefully turn into a functional airport.

Over the past 24 hours I got a lot of messages from friends and family, telling me how happy everybody is that I’m leaving Hebron. I think I’ve never gotten such an unanimous “vote” before.

I still feel somewhat unhappy about leaving. It feels like I gave up too easily. But will see what I think in a couple of days time. On the S-Bahn now, heading for today’s accommodation. 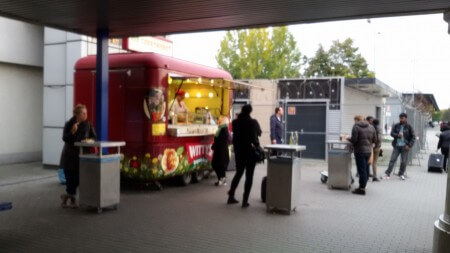 One thought on “Back in Berlin”