To make things short: A Buddhist Temple is not the right place for me.

On Thursday I made the journey up to the temple, helping a group of Dutch tourists not to get ripped off by the taxi drivers on the way. At the temple I checked in and was told that the welcoming would be at 2:30, which left me with about three hours to kill. By the way, carrying 20kg of luggage up these steps is pure fun. 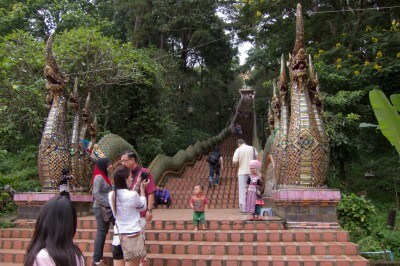 I strolled around the temple and had a last meal outside, knowing that in a Buddhist temple I’d get no food after 12 noon. At 2:30 I was back at the office and a monk gave me and a couple other newcomers an introduction to meditation and temple life.

So far so good. We were also told that there’d be an opening ceremony at 4pm. Now opening ceremony sounded a bit strange to me. Temple? Ceremony? I’m here to learn meditation, no intentions to become a monk.

The ceremony was rather short, everybody sits down in front of the teaching monk, there is a bit of chanting and bowing – done. It followed an introductory speech about the basics of meditation. Not a lot of new stuff for me but fair enough.

Next point on the schedule: Group chanting. Now in general I love chanting in groups but usually the setting is rather different. Thus I wasn’t too keen on what was coming.

At 6pm everybody sits down in the chanting hall. Mind you, sitting down means you grab a pillow and try to make yourself comfortable on the floor. We are handed papers with the chants but as these are in Thai (I assume) obviously nobody can read them so we get ‘translations’. They aren’t actual translation but rather ‘words’ that a westerner can read and sound Thai. Like ‘sarampong amang wamiri’, whatever.

And bowing as well. Bowing to a statue of Buddha. Now that’s really not me. I’m an Atheist and just the sight of people bowing to a statue or picture makes me sick. That experience lasts 45 minutes and afterwards I consider packing my bags. Yet I hardly arrived so I want to see how a whole day goes.

Till the evening I practise a bit of meditation. It’s nice but so far not different from what my Yoga teacher showed me. At 9pm I’m in bed and asleep not much later.

Close to 5am I wake up, beating my alarm clock by five minutes. I refresh myself and at 5:30 I’m in the meditation hall for the morning lecture.

The monk talks about people who came to the temple with all kinds of problems, unhappy with their lifes and how his teachings helped them. To me it seemed just like common sense and I gain no new insight. Or maybe I didn’t get the point. One or two times he talks about ‘Lord Buddha’. I’m surprised, the last time I checked, Buddha was a man and not a god.

We are served breakfast at 7 am (noodle soup) and after that I go and practise some more. It’s going ok and I’m quite happy with that. Before the lunch at 11 am there is some more chanting. It’s only very little this time but it doesn’t need much religion to annoy me.

Meditating all the time is – surprisingly enough – quite tiring and I have a little break before I go to see the teacher for the daily report. He tells me to make some minor changes and keep practising otherwise. That’s what I do until the evening group chanting session.

That session is as bad as it was the last time and I decide to pack my bags the next day unless the teacher comes up with some really good stuff for his morning talk. He doesn’t and I tell him that I’d leave today. He asks what happened and I tell him it’s ok, I’m just not at the right place. He asks me to stay for the closing ceremony at 8 am.

Having no intentions to insult my hosts I oblige, pack my bags and prepare everything for my departure. The closing ceremony is very short as well but again followed by a speech. I don’t know, I get the feeling that most people come to this place because they are unhappy with their life and seek some kind of redemption.

Pretty disappointed I leave my room, hand back my key and a 300 Baht donation for food and water. Where does an Atheist go to learn meditation? Where do people go that are fine with thinking for themselves?