As there are only few tourists in the area I’m often the only westerner and get a lot of looks. Sometimes curious, sometimes surprised (that might be because I’m 6 ft 4) but never unfriendly.

This morning I left my hostel in that part of Bangkok to move to another one in an easier to reach area. I decided to give public transportation a shot as I wasn’t in the mood to bargain with the cabbies. The best way to get around in Bangkok is the BTS skyrail, a train travelling on elevated tracks through the streets. 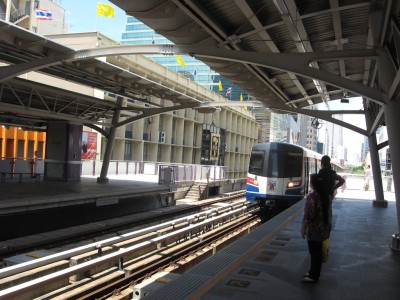 To get to the nearest station I had to take a bus first. Some of the buses are probably 30 years old but the one I got on was a more recent model. Getting on the bus can require a decent level of fitness as the drivers don’t always stop completely, sometimes they just let the bus roll and step on the gas as soon as the last passenger has both feet in the door.

The area around the new hostel is way more downtown with skyscrapers and shiny shops. 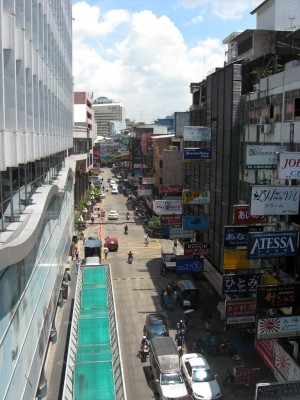 Western tourists are more common here as well. On my way from the train station I was offered a lot of ‘massage’. Happy hour and very cheap, according to the promoters. Those guys are even more persistent than the tuk-tuk touts, bloody annoying.

After dropping of my luggage at the hostel I took a train to the MBK centre, one of Bangkok’s biggest shopping malls. That place is just crazy, from hand-crafted furniture to ‘designer’ wear they sell everything there. 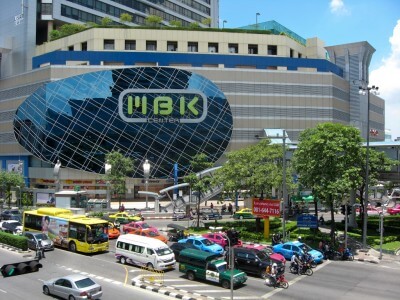 The brand cloths are probably just fake, $3 for a Nike shirt seems a bit cheap. Then again all that stuff is made in Thailand anyway so maybe it’s the same merchandise that goes for ten times that much in western countries. Have to go shopping before I leave Thailand.

Speaking of money, this is what it looks like here: 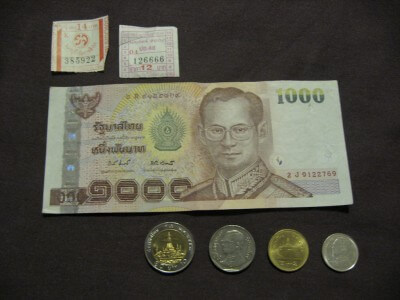 All the notes and coins depict the Thai king and because of that are treated with a lot of respect. Stepping on a coin that is rolling away would be an insult and just stuffing notes in the pocket wouldn’t create appreciation either.

This evening I want to pick up Hiro at the airport. There was a bit of trouble with her visa so hopefully she’ll make it into the country without trouble. Till then I’ll just have a rest in my air-conned room. As much as I like warm weather, the 35+°C make sightseeing just incredibly exhausting.