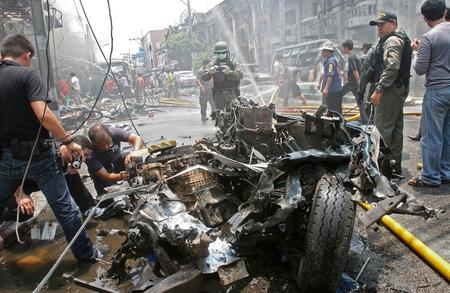 In Malaysia I came across a traveller (German girl) who wanted to enter Thailand through the southern provinces. I asked her whether she wasn’t concerned about her safety. ‘No’ she said, ‘Thailand is ok’.’ Yes’ I answered, ‘but not the deep South’. I explained the situation to her and she got upset.

‘How come people didn’t tell me about that, that’s so dangerous’. She was a prime example of the mind-less/brain-less traveller. Every travel guide has warnings about that area and so do the ministries of foreign affairs in all European countries. It is beyond me how people can be so unaware of the country they are visiting. I remembered the incident when I read the Bangkok Post today.

“Authorities have imposed emergency rule in the Muslim-majority region, which rights campaigners say effectively gives the army legal immunity. The military last week admitted that troops had shot dead four Muslim villagers on their way to a funeral due to a “misunderstanding” […]”