Angkor Wat, described as the mother of all temples and probably the largest religious building in the world. I saved it for the last day of my temple tour and was excited to get there. After splurging with tuk-tuk rides the last two days it was time to be a backpacker again and get onto a bicycle.

Visiting the temples by bicycle has the added benefit of seeing more along the way and being able to stop everywhere. I made a first stop at the moat that surrounds Angkor Wat. It’s a massive 190m wide, that should beat every European castle easily.

Next to where I was standing a Cambodian woman in modest clothes was fiddling around with her mobile. When I was about to leave she asked if I could spare a minute and help her with her phone. I expected something like ‘how do I change this setting’ but instead she told me she just uploaded some photos of Angkor to flickr and couldn’t edit the description. I did not expect that.

Not ten minutes later I got in touch with even more people (apart from the ever-present dealers). I was watching the entrance of Angkor Wat when an old guy started to talk to me in French. I didn’t have a clue of what he wanted but my ‘pardon, je ne comprend pas’ earned me a friendly laugh and a ‘merci beaucoup’. He continued to smoke cigarettes with a monk as old as him. 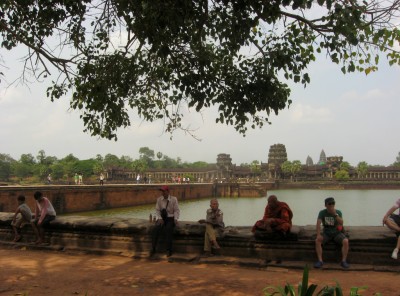 Walking over the causeway towards the entrance gives you a good idea of how large that 190m wide moat is. Inside the temple area I almost stumbled over a wild monkey who was sitting around and eating some kind of fruit. Welcome to Asia. 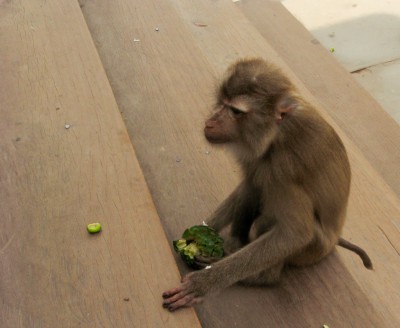 Inside the temple area is the first time you get a complete view of the main building. I think massive will become my favourite word for describing Angkor Wat. 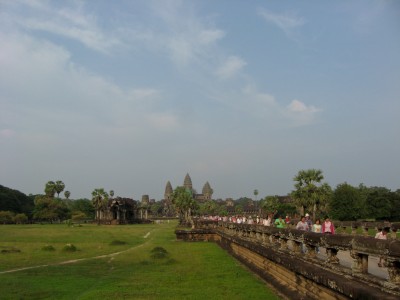 The whole place isn’t just big, it is also incredibly detailed. Almost all around the ground level are bas-reliefs depicting historic events and I think some religious tales as well. There must be at least 500m of reliefs, roughly 2m high. The picture is a close-up, it shows an area of maybe 30cm x 20cm. Now imagine that level of detail on 500m x 2m. Massive. 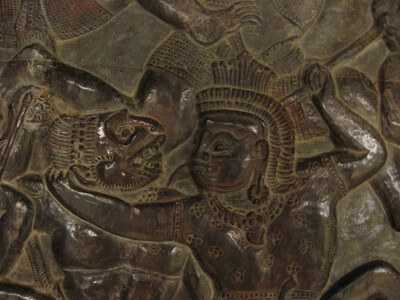 Highest part of the temple is it’s centre. The view over the area is very nice but the steps up there require a modest level of fitness and especially the way down is not for the faint of heart. 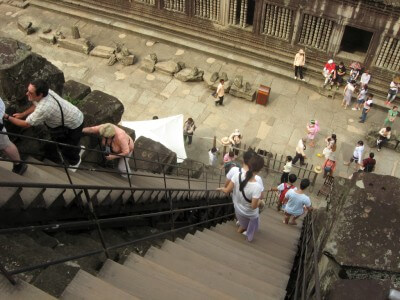 After all the riding and walking my stomach demanded satisfaction and I found myself a nice place to feast on some biscuits. Dry biscuits and water, this is a backpacker day.

Not long after I sat down a monk joined me and asked me where I’m from and how long I’m staying in Cambodia. We ended up chatting for almost an hour and he told me some surprising facts about his life. While he is a monk he is also studying at a (Buddhist) university. He’s studying English, maths, economy, marketing and two other subjects I forgot.

When he told me that I thought he’s got to be kidding me, a monk studying marketing? He’s also getting the hang of computers and mentioned that thanks to unicode he can write texts in Khmer script. I have to do some research on these tech-savy monks. 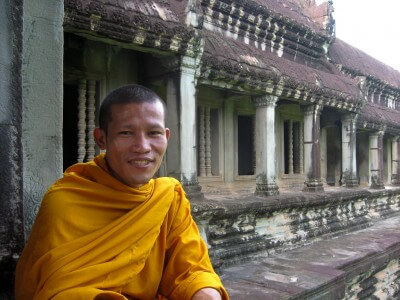 This was an interesting and very surprising day for me.