Before heading to Angkor today I went into town to have a look at the local market. From the guest house it’s just a relaxed ten minute walk along the river.

The market is very similar to those I’ve seen in Thailand. Incredibly cramped and everything is for sale. As my need for souvenirs is pretty much covered I was mostly looking for food and interesting photo opportunities. The Khmer food has been a bit of a disappointment so far. It’s not bad but also not the mindblowing experience that Thai food is. 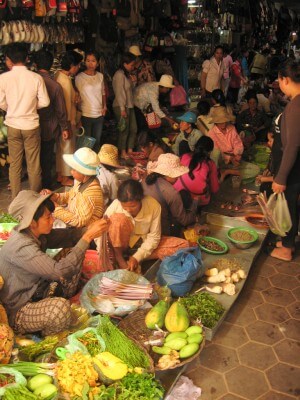 As the recent Cambodian history was a very very rough time I’m interested to learn more about it and on the market I came across some books written by survivors. These books are published in the US and go for $3 ($5 if you don’t bargain) here. Obviously those are illegal reprints of inferior quality but still I found myself in a dilemma.

Buying the proper book supports the author but most of the money will go to the publisher and other westerners. Buying the copy here cuts the author out but the money goes to some poor Cambodian souls. I decided to support the locals. The read has been very unsettling so far. More on that later.

Back from the market my tuk-tuk driver was awaiting me eagerly – since the morning he already asked me thrice what time I want to go to the temples. It’s low season in Siem Reap.

Just after noon we left for Angkor Thom, ancient capital and home to a couple of different temples. As a clarification, Angkor Wat is just one temple. The area around it is called Angkor and contains more than 100 temples.

Angkor Thom is surrounded by a giant wall of 12km in length and 8m high. Inside is – among others – the temple that is considered by many as the second best in Angkor: Bayon. 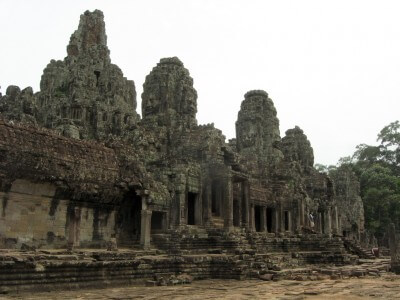 One distinctive feature are 200+ faces of a former king placed on 49 towers. They represent the omnipresence of the king, somewhat of an ancient big brother. Around the first level of the temple are bas-reliefs depicting important historical events. The inside of the temple is a maze of hallways and creates a nice Indiana-Jones-feeling. 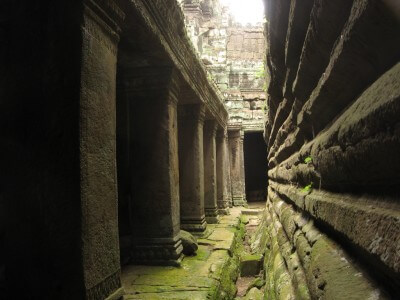 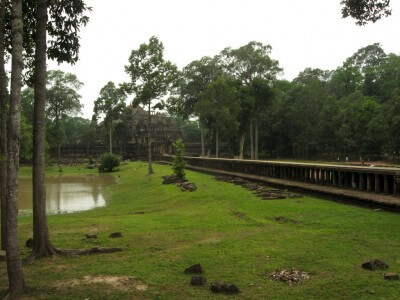 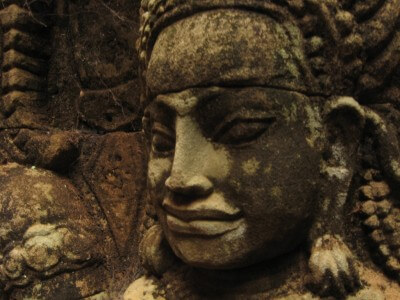 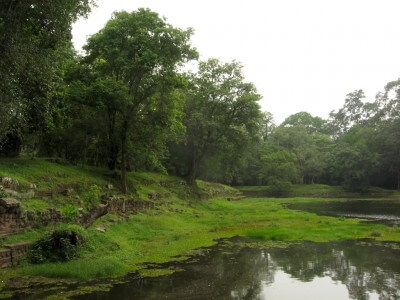 As you can see the weather is pretty cloudy. Sucks for taking pictures but it keeps the temperatures in the low 30s.

Four of five hours later I had enough of temples and went to find my driver. I found him happily asleep in the tuk-tuk. He’s literally getting paid for sleeping but I think that’s ok if you get something around $2.50 an hour. That actually makes him a big earner as many Cambodians live from $50 a month.

The monetary system in the country is pretty unique. The official currency, Riel, is close to worthless. You get 4100 Riel for the dollar. Everybody uses the dollar and the riel is used for fractions as no USD coins are used. Thus when you have to pay $2.50 you pay $2 and 2000r. Weird. I have to spend all my riel before I leave the country, no bank outside Cambodia accepts them.