Being a curious person I always try to get a first-hand impression of things. The internet, various books and fellow travellers are good sources of information but making experiences myself is still the best input. Thus today I once again made myself a subject of science and went to compare Thai and Khmer massage.

The area around the old market seemed like a good spot for that with heaps of massage places around. Just like in Thailand the bottom end are the establishments where a couple of young ladies shout ‘hello massaaaage’ to every passing tourist. Those are not necessarily all places where one is offered a happy ending but they are still not the best that (little) money can buy.

I got a recommendation for a spa from a local expat. Not the cheapest place but with $9 for a one hour massage still well within budget. There was nobody outside the place to drag me in which is usually a good sign. Means they have enough customers cause they are good. 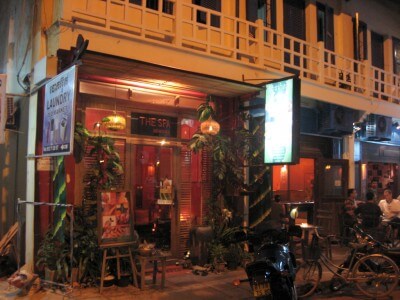 Like at a proper massage place in Thailand I got my feet washed and was shown into a room where I could change into some traditional clothes. That’s pretty much standard as it keeps the sweaty street clothing out and is more comfortable as well.

The actual massage was very similar to the Thai version, too. The muscles get warmed up with what could be described as a regular massage. After that the fun starts with limbs being pulled, knees in my back and a woman walking around on me. Certainly not everybody’s taste but I like it.

From the results I found Thai massage more relaxing in the end but as I’ve only gotten one Khmer massage so far I need to increase the sample size for a qualified statement.

Coming out of the building I was puzzled for a moment. Is this Cambodia 2011 or Vietnam ’73? 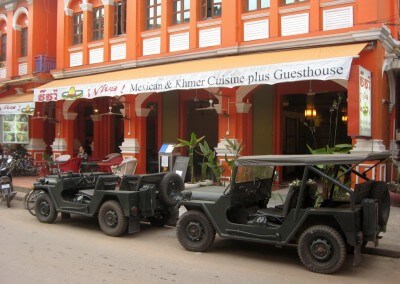 The vehicles are quite common but around here the only sign of American military presence in SEA. The French part of Cambodian history is more visible with many hotels and shops having French names.

Siem Reap itself is not really my cup of tea. The whole inner city is covered with restaurants for westerners and every 15 seconds (no kidding!) I hear ‘hello sir, tuk-tuk!’. I understand that these guys desperately need money and I always smile and shake my head but they get really annoying after a while. 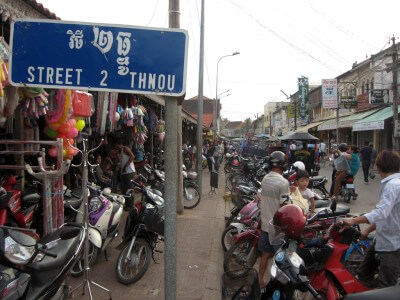 Yet I’m used to that from Thailand. What’s knew for me are begging children and people with missing arms or legs trying to sell some stuff. Civil war and millions of land mines leave traces.

Much to my surprise many Cambodians speak decent English and those that don’t want to sell me something are still interested in talking to me and learning where I’m from and how long I’m staying in Cambodia. That never happened to me in Thailand.

Even though Siem Reap sees a lot of tourists, people are still curious about their guests and not yet dulled by millions of shitheads who want a cheap holiday without the slightest bit of respect for culture and people. Hopefully it’ll stay that way for a while longer. Given that Angkor Wat doesn’t exactly attract the party crowd the chances are good.

Tomorrow I want to go to Battambang to have a look at the less touristy Cambodia. The city is number four on the list of major Cambodian tourist destinations but as it has no spectacular attractions whatsoever it sees far fewer visitors than Siem Reap, Phnom Phen and Sihanoukville.