A blue sky, sunshine and deafening heavy metal music. It’s Soundwave festival 2011 in Adelaide. I got the ticket from my friend for my birthday last year and was really exited to see Iron Maiden live. Like AC/DC I wanted to see them before they die of drugs or – less likely – old age.

The festivals headliners besides Iron Maiden were established bands like Queens of the Stone Age and Slayer. It’s a bit hard to find reliable data but it was about 25,000 people attracted by that lineup.

We arrived in the afternoon without much of a plan of whom to see and decided to grab some beers and just have a look and listen around. There was seven stages set up at the festival grounds and we stopped to see Dimmu Borgir (funny), Slayer (ok) and a couple of other bands.

The crowd was mostly younger people and black was the prevalent colour of clothing. Usually people that like that kind of music look grim but are extremely friendly and peaceful. This festival was no exception and I didn’t see anybody being taken away by the police or security. 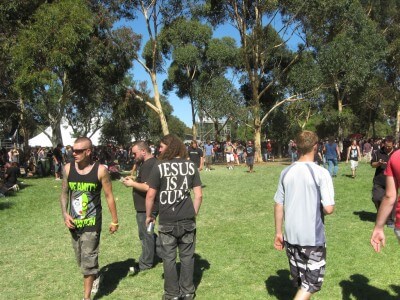 By half six we made our way to the main stages. Queens of the Stone Age were playing directly before Maiden and we wanted to make sure to get a good spot near the stage. It wasn’t too difficult fortunately, a lot of people stayed farther away. Guess being closely surrounded by a lot of people and the smell of beer and sweat is too much for some.

The Queens did a good show even though they suffered a bit from weak participation from the audience. Probably half the people were just standing there waiting for Maiden to play.

At 8pm sharp Iron Maiden entered the stage for a two hour lesson of heavy metal history. The show started a bit slow probably because not everybody was familiar with their new songs. Yet once they played “Two Minutes to Midnight” the audience started to get wild.

They played “The Number of the Beast” not much later and from there on all hell broke loose. It was a great performance and I had an awesome time. Those guys might get old but they still rock. 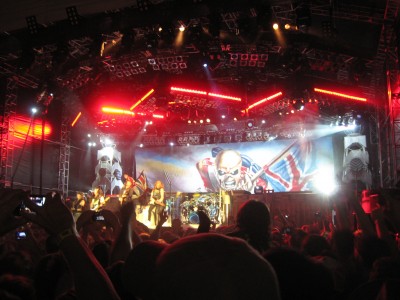