When the diving was finished Hiro and I moved to the southern part of the island to have a couple of relaxed days. We got ourselves a bungalow overlooking Shark Bay. Getting to the beach was a bit of a pain in the lower back but the view from the veranda was very nice (it was one of the huts on the hill). 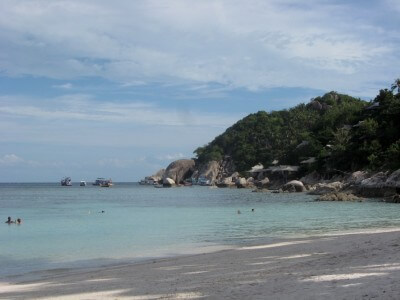 All in all I’m a bit disappointed by Koh Tao. It’s incredibly touristic and doesn’t feel much like the Thailand I got to know in Bangkok and Chiang Mai. The language aside this could be a Greek or Spanish tourist island.

I guess I expected something like Chiang Mai on an island when I came here, that might have been a bit foolish. Still I’m complaining on a high level here. The island has a lot of nice spots, it just takes time to find them.

Yesterday Hiro left for Japan and just like the last time it’s uncertain if we’ll ever see each other again. Such depressing thoughts cry for distraction and thus I spent the afternoon underwater. 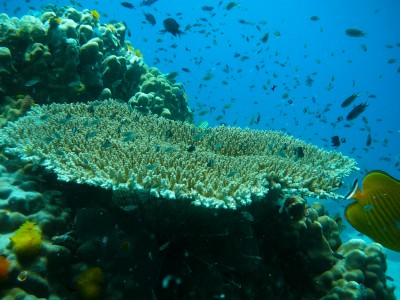 What am I gonna do today? I think diving is an option. 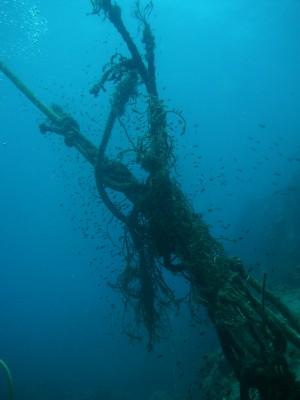 update:
I signed up for diving this afternoon and got lucky because the scheduled dive site is rather far away from the island and usually only visited during morning dives (they leave at 6:30…). The weather wasn’t too good though, cloudy and windy, and the 40 min ride out was a bit tough. The dive boats here are only about 20m long so waves of 1m have a considerable effect.

The dive site is a deeper one and we went down to 25m. After 15-20 minutes I felt a bit of prickling on my skin. That is one of the signs of decompression sickness but suffering from that on 25m after such a short time would be very unusual. Still it made me feel uncomfortable and when you’re 25m under the sea uncomfortable becomes very uncomfortable very quickly.

I chickened out and signaled my divemaster trouble and to ascent. We separated from the group and did a regular ascent. When I told him what was going on his first guess was dehydration. Another possibility is some of the stuff that’s swimming in the ocean. Even though the water looks clear it isn’t always that clean.

Back on the boat I felt ok and didn’t show any signs of illness so no idea what exactly was going on there. But for sure that experience increased my respect of depth and the ocean.

Bit of a rainy day in paradise.