My guest house organized a bus ticket to Battambang for me and with the usual slight delay I was picked up and transported to the main bus station this morning. The place is basically a big hall with a couple of buses and merchants trying to sell fruit, bread and other stuff. Quite similar to Thailand just the signs are in Khmer instead of Thai script. 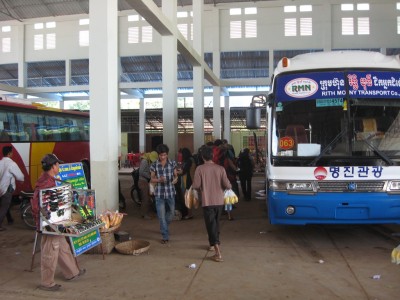 Our driver made extensive use of the horn, getting everything on two wheels to take flight on the street shoulders. Seems that the prevalence of Darwin’s law is common on south-east Asian roads. Recently I noticed that the lyrics of Iron Maiden songs give some proper advice for behaviour in Asian traffic: ‘Be quick or be dead’, ‘Run for your life’, etc. 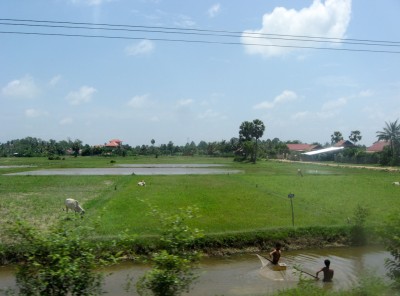 After checking into my hotel I gave a guy I know from couchsurfing a call. He’s been living in Cambodia for a couple of months and I wanted to ask him about things to do in the area and his experience with the country in general.

He told me he was just around the corner from where I was staying and picked me up to get a drink and a bite to eat. We went to a small bar run by a French expat and by the time he had to leave it was half six and we had gone through a couple of beers.

I got a recommendation for a restaurant and went to give Khmer food another shot. So far I’m still waiting for the ‘Wow-Experience’ from that. The noodle soup wasn’t too bad but still has room for improvement.

At the table next to me was another westerner and when he had finished eating there was still some food on his plate. A kid came up to him and asked if he could have the remains. Apparently that’s common here, what you don’t eat goes to the poor. It’s a very strange experience to eat foot while begging children are eyeing you.

As the guy seemed as puzzled as I was, I asked him how long he had been staying in Asia for. Turned out he’s an Aussie working as a medic in the oil and gas industry all over the world and taking his month off in Asia. We headed over to the bar for a couple more beers and he shared some stories from his work life. They were extremely entertaining but not even remotely appropriate for this blog.