On Wednesday I woke up feeling weird and almost having to throw up. Releasing my bowels was most unpleasant and with all signs of a fever coming up I decided to go back to Chiang Mai – not keen on getting ill in a mountain village where I don’t know a single soul.

By now I’m feeling a bit better with the fever almost gone. I still don’t have a clue where I caught that gastroenteritis or whatever it is. The day before I got sick I only ate at restaurants and drank bottled water from the 7/11 but Hiro pointed out that even at a restaurant the dishes might have been washed with unclean water. 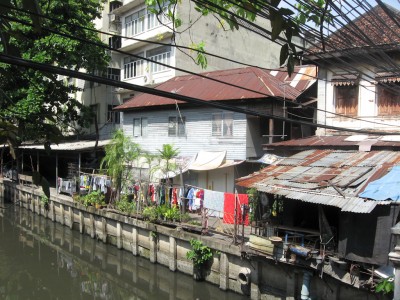 The purchasing power for that money is higher in Thailand though as food and accommodation are cheaper as well. Goods from the western world remain expensive and make a prime target for theft. A friend of Hiro had her notebook stolen. She was sitting in a cafe with the notebook on her lap when some kids approached and smiled at her. Before she realised what was going on the kids had snapped the computer of her and were running away.

There also is a difference between the tourist Thailand and the rest. Since 2008 Thailand and Cambodia have a dispute over some temple in the border area. The last incident in that dispute was a three weeks armed confrontation in April/May that brought the total death toll to 40 (soldiers and civilians).

Similar things happen in the far south where muslim groups keep fighting the Thai government for years – a conflict that left more than 3000 people dead so far. Fortunately (for everybody not living in these areas) violence is not common in other parts of Thailand and while tourists face theft and fraud on a daily base, assault is a rare occurrence.

It really takes time to realize how different this country is.