Before I came to Asia I didn’t know much about Cambodia and would have had trouble pointing it out on a map. All I knew was that it’s somewhere in Asia, has some massive temples and some kind of war going on. Well the later isn’t true any more, that was just a fact I picked up as a teenager and kept in memory.

The western world had its fair share of genocide with Hitler and the catholic church being some of the major players in the league of slaughtering countless innocent people. Yet they acted on a large, worldwide scale. Think about what they did and put it in a single country. That should give you an idea of what French-educated Pol Pot and the Khmer Rouge did to Cambodia.

They took the power in 1975 and being fanatic communists started to completely change the country. The cities were evacuated and every living soul sent to the fields to work in labour camps. Imagine that alone. The entire intellectual elite, basically anybody with an education better than a pawn, was seen as a threat and murdered. Schools and hospitals were closed, money was abolished. For five years Cambodia had no currency.

The total death toll for this era is estimated to be between 1.4 and 2.2 million people out of a population of 7.5 million in 1975. Half of them were executed, the rest died from starvation, poor work conditions and a lack of medical care. 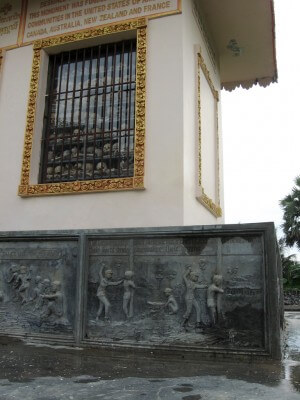 Despite both being socialist/communist countries, Cambodia and Vietnam didn’t get along well and in late 1978 Cambodia invaded its neighbour. That endeavour backfired badly and resulted in the Vietnamese controlling large parts of Cambodia just months later. The Khmer Rouge were forced to retreat to the western part of Cambodia and even into Thailand and for the next 12 years the country had a civil war.

The Vietnamese started to build a client government in Cambodia but internationally this was only recognized by pro-soviet countries. The Khmer Rouge in their fight against the Vietnamese and the new Cambodian government got massive support from China, the USA, Britain and Thailand. This was despite the fact that the horrible human rights violations of the KR were widely known in the western world.

In their attempts to keep the Khmer Rouge from advancing into Cambodia, the Vietnamese put their so called K5 plan into action and created massive mine fields along the Thai-Cambodian border.

The civil war ended when the Soviet Union collapsed and the Cambodian government was forced to negotiate a peace plan. The United Nations sent troops into the country and in 1993 elections were held that yielded the FUNCINPEC party as a winner.

Even though the Khmer Rouge were never formally disarmed their power ceased and at the moment their leaders are on trial for the massive human rights violations committed under their reign. As many people in the  current government have a KR history nobody really expects a harsh punishment for them, though.

The millions of land mines left by the Vietnamese still kill more than two hundred people a year and mutilate even more. Cambodia is one of the poorest countries in the world with a GDP (PPP) per capita of $2100 (Norway: $52,000, Germany: $36,000). 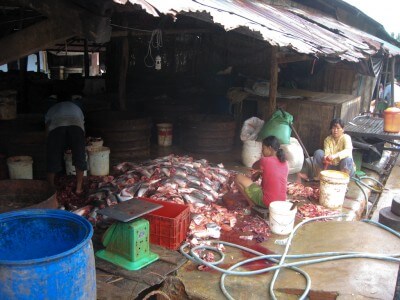 The book I bought at the market in Siem Reap describes Cambodia under the Khmer Rouge from the views of a young girl whose family is forced to leave the city and work in various labour camps. Her family of ten is decimated to a family of five by the time they come to the USA as refugees four years later.