On the 4th I’m booked on a flight towards Germany, so it was time to say goodbye to Cambodia and return to Bangkok. I didn’t wanted to come here in the last minute, you never know what’ll go wrong.

I really liked my time in Cambodia even though often the things I saw weren’t exactly cheerful. Never before have I seen such a level of poverty and thinking of People in Germany who claim to be poor because they can’t afford a car or TV is just ridiculous. 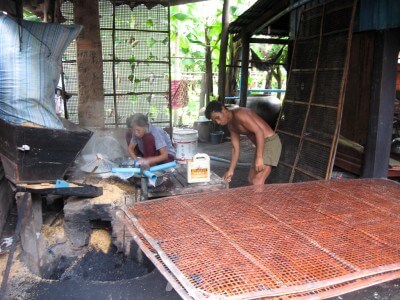 Yet I think always feeling bad about being rich while everyone else is (more or less) poor doesn’t help either. Thus I gave money to the people but at times also allowed myself to ignore the poverty and have a good time.

My French connection Manu invited me to spend the last evening with friends of his and some mojitos. They picked me up in the city and we went to go shopping. Honestly, despite what I wrote above, when you’re leaving the shop with mojitos on your mind and you see this, you just feel bad.

Saturday Morning I had to get up early to catch a bus to Poipet leaving at 7:30am. Taking a bus from Poipet to a destination in the country is close to impossible for a westerner, the other way around is easy and cheap. Battambang -> Poipet in a bus: $5. Poipet -> Siem Reap in a taxi: $47.50. And the taxi driver only gets $30, the rest goes to ‘the association’, freaking criminals.

Around 11 am we reached the border. I grabbed my stuff, got stamped out of Cambodia, walked through no-mans-land and not much later I was back in Thailand. Crossing the border in this direction is certainly easier, just some begging kids and a couple of touts to deal with. 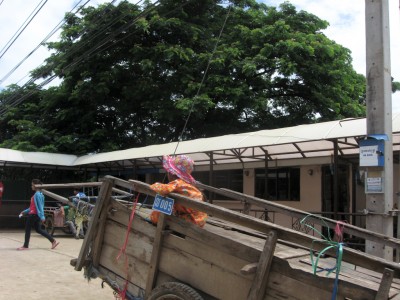 Exiting the immigrations office I felt a bit relieved, I was back in a country that has 7-elevens and where I speak enough of the language to ask for food, water and directions.

Shortly after 4pm I reached Bangkok and, still having my bus adventure from the last time in mind, decided to take a taxi to the subway. I showed the driver on a map (with Thai script!) where I wanted to go but he didn’t get it right and we had some fun negotiating the final destination while he was battling Bangkok’s rush-hour. Finally he dropped me of at the MRT and I headed for the city. There I realized that I could just have taken the sky-train, which would have been faster, cheaper and easier for the cabbie. Oh well.

I picked a guest house on Sukhumvit Road that’s close to public transportation and the airport. The area is full of tourists, too many of them white, single males in their 40s and older. Often they walk around with their Thai girlfriends who are at least 20 years younger and sometimes look like they barely pass the age of consent (15 in Thailand).

Obviously I know that an Asian/European couple can be legitimate but I’d bet a hundred bucks that most of the people here are just odd scumbags.

Tomorrow I’ll just kill my time here – already seen a lot of Bangkok before – and hopefully be on an airberlin flight to Düsseldorf Monday morning at 11:30. 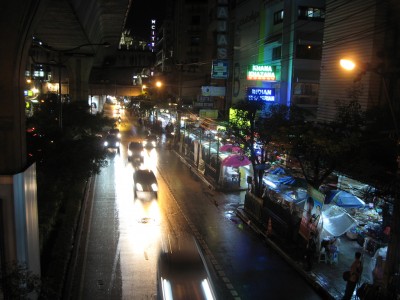