After a hearty breakfast with toast and jam I checked out of the hostel and made my way to the PWTC station. It’s about 15 minutes on the LRT from Chinatown. From the station it’s another ten minutes walk to the Putra bus terminal where I got myself a ticket to Cherating via Kuantan (RM 24.60 with Utama Ekspres). The ticket shows Kemantan as destination but you can tell the driver to drop you off at Cherating. 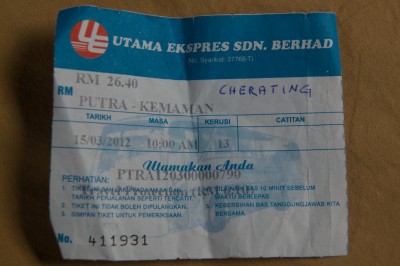 The bus left at 10 am and was completely full. It probably would have been a good idea to come to the terminal a day earlier and get a ticket in advance. That also would have saved me an hour of waiting around at the terminal.

About half an hour before Kuantan the bus made a 30 minute stop at a rest area/shop/food court. The food was ok and not overly expensive. Back on the road we stopped at Kuantan not much later and then headed north out of the city.

At 14:30 the bus pulled over and the driver signaled me to get off. From the main road it’s a short walk into town where guest houses, restaurants and shops await.