Coming to this remote place that doesn’t even have a proper bus stop, I expected peace and quiet. Just plain nothingness, no frills. Unfortunately the first night was anything else but quiet. A nearby bar played music/karaoke till the early morning and that crap pretty much kept me awake for hours.

Today around noon the weather cleared up and I went for a little exploration on the beach. Like all beaches in SEA it suffers from pollution, people are just used to dropping their garbage where they stand. Judging by the looks of this beach, nobody is making an effort to clean it up, making parts of it look like a garbage dump.

In the late afternoon a lot of noise gave the impression that somebody was re-enacting scenes from ‘The Fast and the Furious’. Upon closer investigation it turned out that a bunch of local youngsters took turns in drifting across a parking lot in their ancient Toyotas. Got quite an audience these guys. 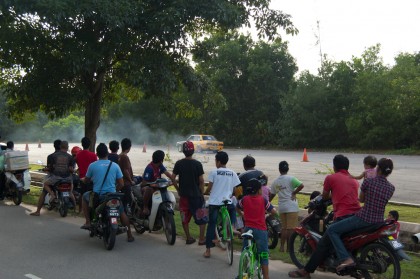 At some point the police came around but their visit didn’t make any difference. Maybe the offenders threatened to run over the police scooter with their rolling garbage heaps, I don’t know. 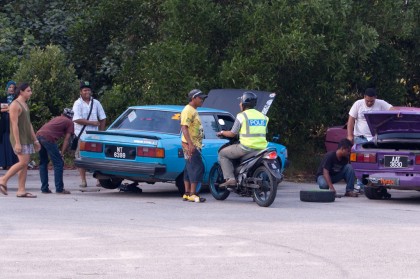 As much fun as watching such stupid things is in the beginning, it got boring quickly and I buggered off to the beach. There is very few westerners around there, the majority of the people are probably domestic tourists. Some of them were giving soccer a go. Watching these guys was definitely more entertaining. 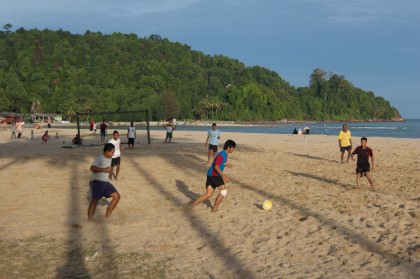