The next lodge after Khopra, Bayali, can be reached via an upper and a lower route. The lower route descends down to Dhan Kharka at 3000m and then climbs back up to Bayali at about 3450m.

The upper route goes more or less straight, which means it is still a constant up and down but more mixed. 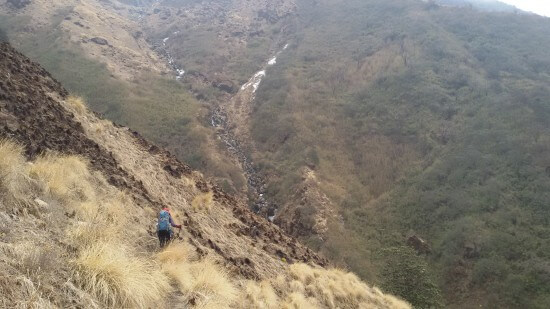 During harsh weather, the upper route is extremely demanding and has caused more than one casualty. We had good luck with the weather though and other trekkers had confirmed that the way is ok at the moment.

The weather at Khopra was still freezing and we set out in full winter gear with down jacket and warm undies. Not an hour later, a fleece and rolled up pants were warm enough in the bright morning sun.

The path was as narrow as usual and constantly led along the slope of Khopra Ridge. Some parts were rather steep but still manageable.

Once we had left the side of the valley that got regular sun exposure, the temperature dropped and the ground was still frozen. In more than one part patches of ice demanded careful steps. 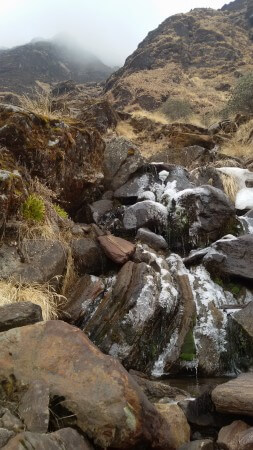 The vegetation was initially just rough yellow grass but later changed to an interesting mix of bamboo and rhododendron. 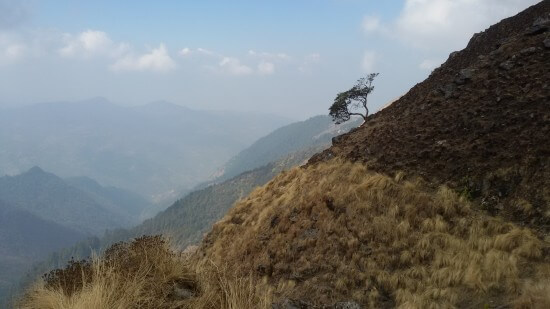 After about 4.5h, at 12:40, we reached Bayali and ordered lunch right away. The host pissed me off thoroughly by throwing me out of the warm kitchen and having me eat by myself in the cold dining room. Nepalis in the kitchen, westerners in the dining room, he demanded. Segregationist prick.

Staying for the night would have been an option but wasn’t any more. I chewed down the mediocre Dal Bhat and immediately hurried Kamala to get back on trek. My anger didn’t last long though.

Our walk now brought us along a small ridge, to the left of which low hanging clouds blocked any view of the valley below. 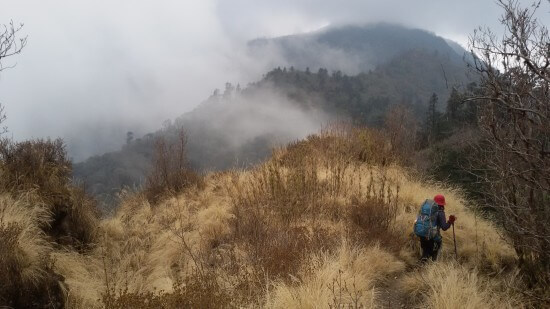 For a good bit we walked through a pine forest, a sight my eyes hadn’t caught in a while.

With the clouds drifting between the trees, it looked like the perfect setting for a horror movie. Maybe Himalayan Blairwitch Project or something. 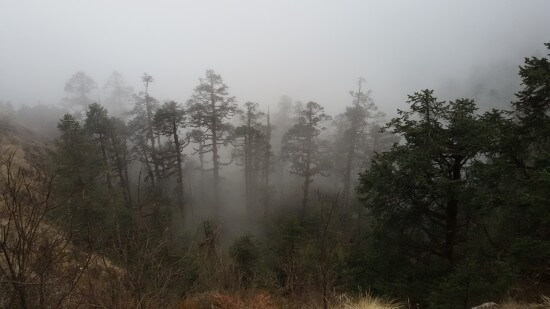 In the afternoon we reached Dobato and decided to make it our quarters for the night.

The six hours walking hadn’t emptied my batteries yet and after a rest and a coffee I was keen on walking a bit more.

Kamala joined me for a stroll up to a nearby viewpoint and we were rewarded with a 360 degree panorama. Probably doing that 30 minute hike again tomorrow for sunrise. 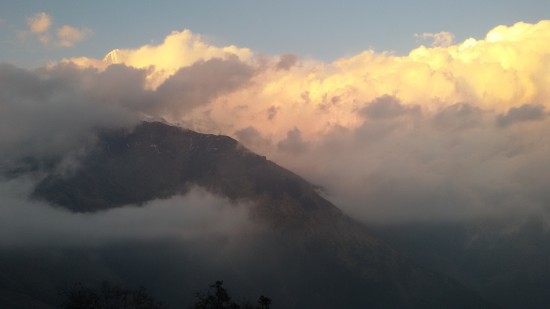