Having spent the early afternoon dozing (I blame the heat and the noise), I wanted to be a little more active afterwards and went to see Jerusalem from above. Well not really from above but at least from high up.

Mount of Olives is the go-to destination for that and hostel staff recommended to take a Palestinian bus up there. Those leave from the Arab bus station that serves East Jerusalem and the West Bank.

Didn’t find it right away but a friendly local pointed me in the right direction. Once on the bus I had no clue of what the driver was shouting out. Good thing three older French ladies in front of me had the same destination and let me knew the right stop to get off.

View from the top is nice, might be really cool during sunrise, when the light is coming from behind.

On the way back I walked through the old city again (without losing my way this time). Coming out of Damascus Gate, I saw a crowd of people singing and cheering. Cool, I thought, live music! But once the first Palestinian flag appeared, I got the feeling that it might actually be a political demonstration.

Not even a minute later, Israeli police (or soldiers, can’t tell the difference) are in the middle of it. The crowd starts shouting “Allāhu Akbar” and I retreat back into the inner walls of the old city. 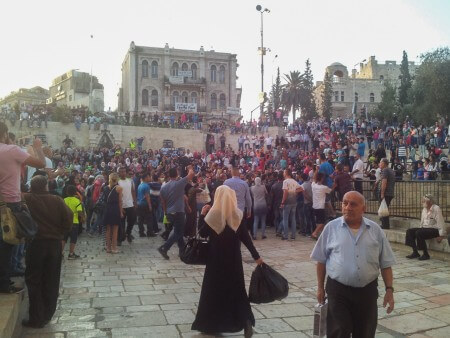 Things don’t escalate any further though. Police pull out and people continue singing and dancing. Guess that kind of stuff is normal around here.