For the last couple of days I mostly rested my lazy bum on the beach and when I moved it, it was to go to the restaurant, to the 7-eleven (ice cream and cold drinks) or the massage house. As much as I enjoy doing that it is unfortunately burning my funds much quicker than expected. 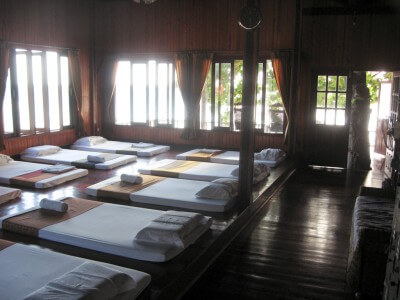 For the rest of my time in Asia I have another adventure on my list: Cambodia. Initially I planned to take a plane from Bangkok to Phnom Phen but as I failed to make an early booking the prices are pretty high by now. Taking the plane costs more than twice of what it takes to get there via land and being a poor backpacker every dollar counts for me.

Getting into Cambodia via a land crossing is a bit of an adventure. It is a way lined with begging and stealing kids, touts and more touts. There is some solid information on the internet though so I expect to make it to Siem Reap without getting cheated too much. I’ll leave Koh Tao tomorrow afternoon, take an overnight train to Bangkok and get on a bus to the border there.

The local travel agent who sold me the ferry and train ticket was unique to say the least. He’s from Hong Kong and basically running his office to pass the time till the evening when he can go out fishing. We were chatting for at least half an hour and he told me about his various trips around the world, how he gets lost all the time and how he’s not really interested in selling me anything cause his wife is taking all the money anyway. Better than the movies.

Have to make some travel preparations now and say goodbye to the restaurant. And the beach. That’ll be a longer goodbye.

For an entertaining tour booking head to a small agency on the northern end of the main road, somewhat across the Simple Life Resort. There is a sign saying ‘we speak German’ in the window.