Friday started with a visit to Cambodia’s recent history. The Tuol Sleng museum in town is a former school that was turned into a prison by the Khmer Rouge. They used it to ‘interrogate’ political opponents and interrogation here as the same meaning as with the catholic inquisition.

Those unlucky enough to end up here were either tortured to death or tortured and then brought to a killing field outside the city. The place is pretty much left untouched and the old classrooms still contain the cells (0.8m x 2.0m) where the prisoners were kept.

Like the nazis, the Khmer Rouge kept detailed records of everybody who went through S-21, as it was called. In many rooms the pictures of these victims are displayed, some also show them after the torture. 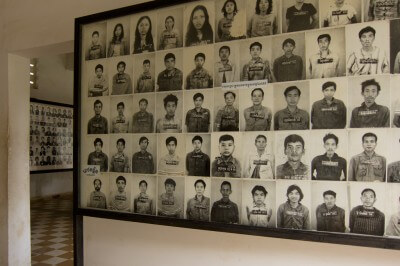 It took me more than an hour to walk through all the rooms and seeing all the pictures is deeply depressing. Men, women, children, women with babies, they just killed everybody.

After the visit I was in need for distraction. Markets are always good for that and the Russian market in town is said to be worth a visit. The usual way of transportation here is the motodop, a guy driving a 100cc semi-automatic, taking people along for a fee. It is a bit scary but nobody here drives really fast.

At the market they have the usual collection of rip-off brand cloths but also a lot of the genuine stuff. Many companies produce in Cambodia now and a lot of stuff from the factories ends up on the markets. Usually sold for a tenth of what the stuff costs in the west. 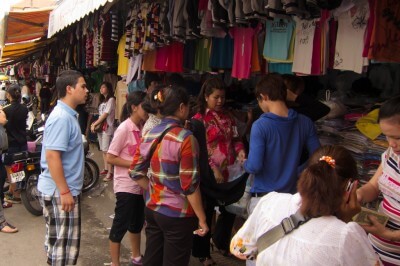 Before I came to Phnom Penh I contacted a couple of couchsurfers and in the afternoon I met with a Dutch guy who had been living in the city for a while. His name is Patrick, he quit an IT job to go travelling and he had a Japanese girlfriend. Almost scary.

He told me about life in Cambodia over a couple of beers and around 7pm I made my way back to my hosts house. There was nobody at home so I gave him a ring to see what everybody was up to. ‘We are at the casino for free beer and food’, I was told.

Five minutes later I was on the back of another moto, heading into town. Now Cambodia is a shit poor country but the casino doesn’t look like that.

Inside it looked just as posh and people were throwing cash at the tables like it was pocket money. The casino has an interest in people making bad decisions and alcohol always contributes to that. How to get people drunk? Serve them free drinks.

Even though we are backpackers in short and shirts we still look like money. We simply have the right skin colour. Thus we spent the next 3-4 hours at the place, drinking free beer and feasting from the buffet. 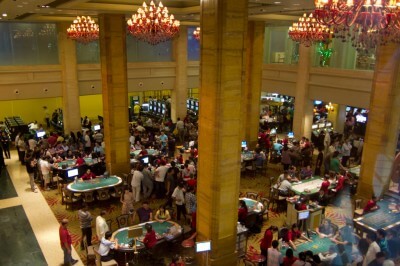