Just four days since the last train experience and I was ready for the next one. No overnight trains for me though. Not in the near future. This time it would be a day train, specifically the one to Montenegro (via Užice).

Unlike last Friday I was already tired when I arrived at the station. Thanks to a noisy street in front of the hostel and a bunch of little shitheads in the hostel. But no travel experience is complete without some inconvenience. Have to try earplugs at some point…

To make my morning a little more relaxed, I had already bought a ticket on Saturday (About 6 Euros for the 4h ride) and didn’t need to hurry to get to the station this morning. 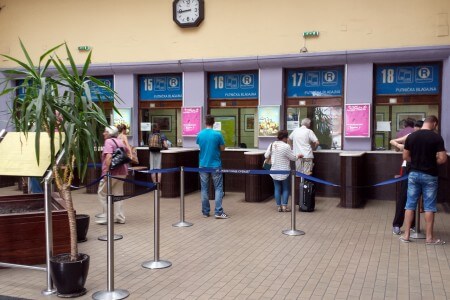 Having seen the overnight train, I didn’t expect too much for today’s ride (especially not for that price). As seems to be the norm around here: Second hand rolling stock from countries farther north (it’s the train on the left, by the way). 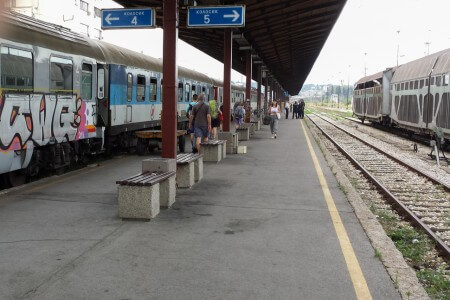 Departure was pretty much on time and for the first half hour or so the train crouched out of Belgrade and its surroundings. Once in the open, GPS showed a whooping 95 km/h. Not for long though.

Once we approached the Dinaric Alps, Serbian Railways did its best to show passengers as much of the lovely surroundings as possible. And while it is not the fastest track on earth, it certainly is a nice one. Winding through narrow valleys, squeezing to the hill side, nice!

With minor delay we reached Užice. After checking in at the hostel and dropping of my bags, I went on a first orientation round. They have a medieval fortress (ruin) here. The view is worth the climb. 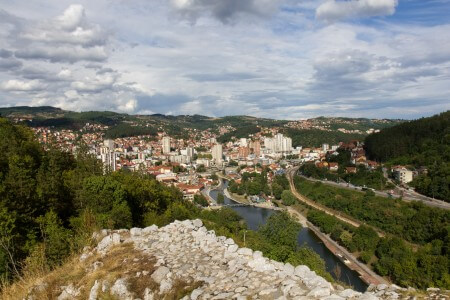