Those were the words of the flight attendant announcing our arrival in Scotland. Edinburgh was sunny indeed and a big improvement over rainy Bremen were I left Germany at half nine this morning. 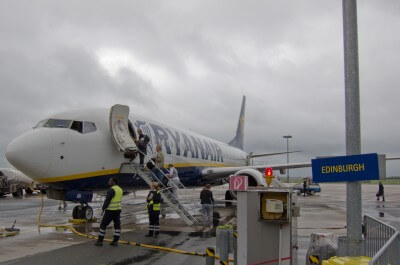 Getting to Bremen was pleasantly uneventful, no trouble with the trains this time. At the airport Ryanair has a private terminal and they probably have that because no other passenger would want to stay there. It’s ugly. 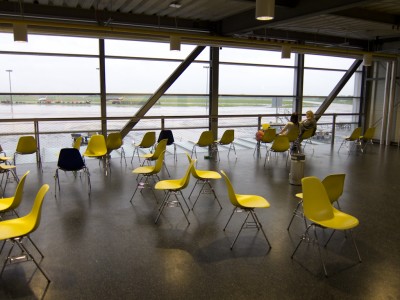 Upon arrival in Edinburgh I had to get some local currency first, no Euro here. The ATM declined my card, saying ‘card issuer unreachable’. This would have upset me in younger years but it doesn’t any more. I grabbed my luggage first, tried another ATM and a minute later hold some Pound sterling in my hands.

On the bus into the city I asked the driver where I could get off to catch a bus to Glasgow. ‘Mayburrrrrry’ was his answer. If you think the Russians roll the ‘R’, you should hear the Scottish. I really like the British accent in general, definitely my favourite.

In Glasgow I needed another bus and I asked some official looking guys for directions. After minutes of discussion and them pointing in every direction they agreed on an advice and sent me off. Their advice was good but I still ended up at the wrong hostel. That was my fault though, as I simply booked the wrong hostel yesterday. Planning travels into seven different countries at the same time apparently is too much.

I got myself one of those fancy cabs you always see in movies from the UK and had my driver deliver me to the correct hostel’s front door. It seems that cabbies in the UK don’t get tipped very often as he was extremely thankful for just a quid on top of the actual fare.

The hostel is in an old Victorian building, mansion they call it, and has recently been refurbished. After checking in I took a well-deserved rest (got up a 5 am) and then went to discover the city. It is a pretty ugly city with not a lot of green but a lot of worn-down houses. A lot of the people look worn-down as well. 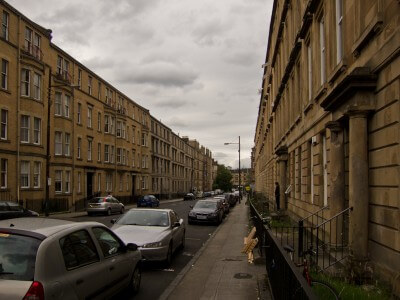 The actual city centre is a bit better in terms of buildings but still far from being attractive. No need to spend two nights here so I rescheduled my stay on Islay and will go there tomorrow. 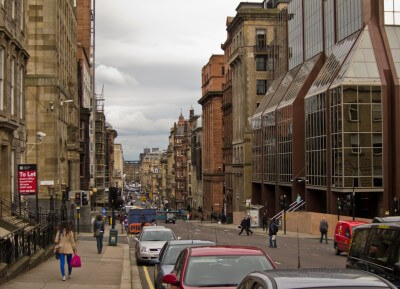 The hostel I’m staying at is run by the Scottish YHA and usually I try to avoid YHA places. They provide a high standard, they are clean but also totally boring. This one’s not an exception. In the lounge most people are reading or – like me – using a computer. No consumption of alcohol anywhere and everybody is whispering, yikes.

Getting up in the morning I felt like I’m staying at a retirement home. An old disabled lady asked me to help her down the stairs. I’m used to people being unable to walk in a hostel but usually old age is not the reason for that.