Getting to sleep the other night proved a bit difficult. There was a lot of unfamiliar noises from the pigs and dogs around the house and in addition the villagers had a bar playing music till the early night. The village has a water-powered generator that provides a bit of light after sunset but they still try to utilize as much of the daylight as possible. Thus they get up early, the roosters start their concert before the sun is even up.

Before breakfast we had some time to explore the village. The place looked stunning with the cloud-covered mountains surrounding it and the sun breaking through. 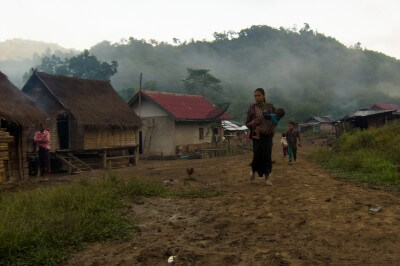 The people have very little, the only things earning them money is rice, crops, chicken, pigs and similar stuff they sell at markets. At least they are getting toilets soon, which will save them a couple of walks down to the river every day.

Taking care of the children seems to be a duty shared between men and women here. That hasn’t always been like that. From what our guide told us, there had been times when a man had several women who did the work while he spend the days smoking opium and hanging around. 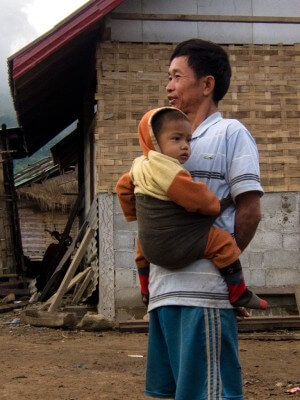 We left the village after breakfast – no rain today. On the way out we came along a woman wearing a shirt saying ‘Fuck off, Wanker’. I doubt she understands what that donated piece of garment has printed on it. 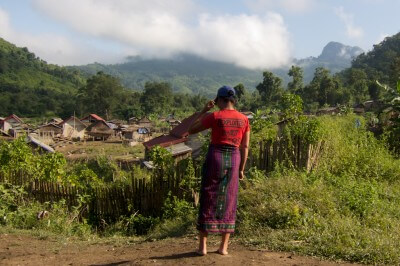 For the first half of the day our guide had announced an uphill walk. And what a walk that was, the dense jungle forced everybody taller than the average Lao to duck and in the shady areas the path was still wet and slippery. Still it wasn’t as bad as on the first day. After an hour we reached a first clearing and could oversea the valley we had just climbed out of. 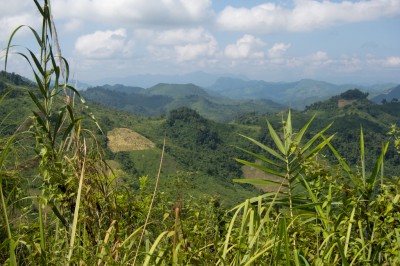 Fairly often we had to stop to fight off a crawling nuisance from the mud: Leeches. They jump on to everything that smells like mammal and once they are past the shoes suck as much blood as they can. A lighter or mosquito spray are quite effective in convincing them of an early leave.

Our uphill trek continued till noon when we reached a village that provided some shelter from the now burning sun. Everybody was fairly exhausted, except for our guides who went to prepare lunch. Both of them grew up in small villages and have the same physical constitution as the farmers. Without shirt these guys look like an Asian version of Brad Pitt which isn’t much of a surprise as they’ve been working out every day of their lives. Mildly refreshed we left the village behind us at around 2 pm. 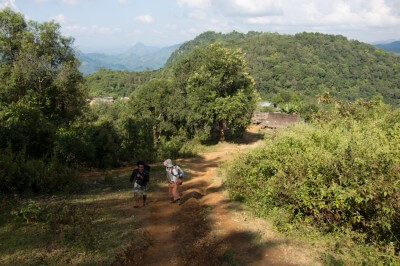 From now on our way led mostly downhill or along mountain ridges. It’s rice harvest at the moment and everywhere the fields looked golden in the afternoon sun. Two hours before sunset we left another nasty piece of jungle behind and got a view over the valley were our transport would await us. 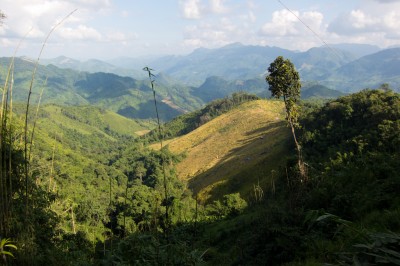 We managed to get that last bit behind us and the final half hour was an almost leisurely stroll down a river bed with just a little water in it. Close to sunset we reached the car that would take us back to town. An actual minivan with real seats this time. Which was a good thing as the ride back to Luang Prabang took 1.5 hours on a bumpy dirt track.

This was simply the most strenuous, exhausting and interesting walk I’ve ever done.