More than a year abroad and I didn’t miss Germany as a country once. Family, friends, cheap food, cheap beer, cheap everything, yes, but the feeling of living in the country, no. Thus it didn’t surprise me that being back feels ok but nothing more. Spending a little more time in other parts of the world is hence ok in that regard.

Every now and then I’m asked how all that travelling is affecting my future, namely getting a job and later a pension. Getting a job doesn’t seem to be a problem, yesterday the postman delivered five letters with job offers from all over the country.

The pension thing is a little more tricky. Can I rely on ever getting decent money? Right now states are on the verge of bankruptcy and the world is more and more rapidly changing. Countries like China gain economic and military power, while the traditional power US is struggling and basically unable to control a bunch of camel riding pawns.

Now I don’t believe in any of that 2012-doomsday mumbo-jumbo but I think everybody who claims to know the world in 35 years is either ignorant, stupid or mental. Yes, most likely Germany will still be quite the same with people getting their pension and everything, but who knows.

Money is not the only concern about age though. Who guarantees me I’m not going to die of cancer or whatever within years after retirement? Should I live the German dream by waiting till high age before enjoying freedom and going travelling? Fuck no. That last year has by far (light years) been the richest in my life. I’d be stupid to refrain from that and instead go back to a ‘normal’ life so I can work towards my retirement.

With that being said, where am I going next? New Zealand kindly approved my visa application which means I have the right to live and work in that country for one year now. Initially I thought about going there in early September but from that time till the end of October New Zealand hosts the rugby world championship and most of the country will be booked out and bloody expensive.

Right now I’m considering to arrive there after the cup and instead do some travelling in other countries before. Scotland has always been on my list and I’d be interested in having a look at north Africa as well. Getting there with low cost airlines is incredibly cheap (less than €100 return) but the political situation seems to be a bit unstable at the moment.

Another option is to fly into Bangkok, travel on to Singapore and go to Auckland from there. Unfortunately travelling from Thailand into Malaysia overland would involve travelling through the southern provinces which are under the state of emergency at the moment. It’s really weird, when I used to plan my summer vacation I spend days looking at reviews for hotels and destinations. Today I just try to stay away from armed conflicts and other sources of physical harm. 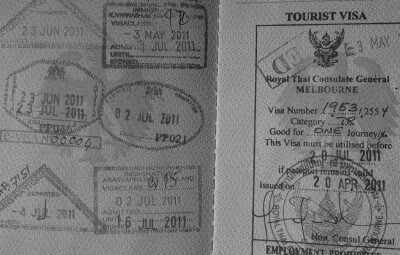