Bus stops in Yangon are a noisy thing. Conductors of waiting and arriving buses shout directions and routes at the top of their lungs. For somebody who doesn’t understand the language nor is able to read the numbers, it is a somewhat confusing experience.

Luckily I had student of the German language and future tourist guide Hanny with me, who had agreed to join me for a trip to the country side south-east of the city.

She got us on the right bus and not much later we had left the city limits behind us. The radio on the bus was playing surf music, which was kind of fitting for today’s destination: a pagoda in the middle of a river. 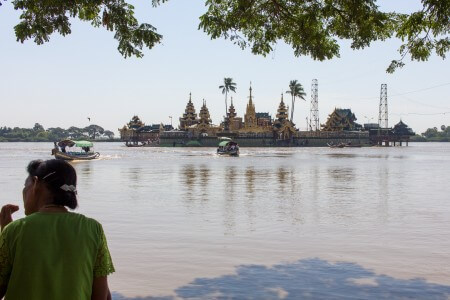 Locals buy a lot of fish food here and throw it into the river from one of the pagoda’s piers. The fish in the water were plenty and massive. My question of whether we could get some for dinner was met with a disapproving look and the explanation that these are Buddha’s fish and not to be eaten.

As during the last visit, Hanny shared a few stories about life in the country and it’s stories of a country developing fast. Very, very fast. Apparently 2014 saw three times as many tourists as 2012 and the number of cars in Yangon has simply exploded.

International corporations are pushing into the country and I reckon it’ll be a big challenge for the locals to cope with a world they had little exposure to when they grew up. 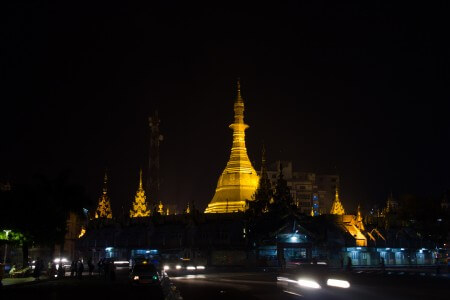