I forgot my passport, that’s a first. I realise it when staff at the bus company ask for it. I run outside but the driver who brought me from the guesthouse has already left.

It’s 8:25, it’s a 25 minute ride to the guesthouse and the bus leaves at 9:00. The guesthouse doesn’t have a second key for the locker that holds my passport, so I need to go back and bring the key in my pocket.

At 8:30 I sit on the back of a 125cc moto taxi. The driver knows time is pressing and squeezes the little engine for all it’s got.

The Burmese Valentino Rossi honks his way through the Mandalay traffic, which fortunately isn’t as bad as Yangon.

At the guesthouse I run into the room, get my beltbag and sit on the bike no two minutes later. The driver checks the time, 8:50, and knocks it up a notch. He’s not too crazy though, I’ve done much worse in my time as a rider.

Halfway to the station he gets a call and shouts something in Burmese, I wonder if it was the bus company.

We reach the station and oh joy, the bus is still there, waiting. It’s 9:08 and the bus drives off before my lower back even hits the seat.

Cruising through the countryside now, land is flater than Northern Germany. 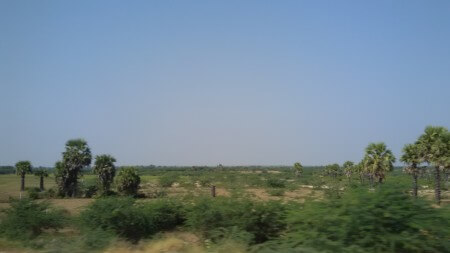