When I did some research on which farm to visit next I found out that the grape picking season is about to start around Adelaide. That brought up the question of whether I could make some money while accumulating the necessary farm work time for my second year visa.

Regular fruit picking is still not an option as it is backbreaking work and shitty pay. I don’t like jobs that involve either of that. Last week I checked the job offers on gumtree and found a winery that was looking for tractor drivers. I gave them a ring and the guy asked me to come around ‘any time on Friday morning’.

When I arrived John showed me around and asked some questions about my farm work experience. He also gave me some details about the job and it doesn’t sound too easy. The work is not regular, some days there will be no work at all and on other days it will be 16 hours straight. It also involves night work as white grapes can’t be harvested during the day.

The upside is a pay of ‘around $25’ per hour. Sounded good enough for me and he told me he’d give me a call as soon as work started. The call came sooner than expected, on Saturday Noel asked if I could do some work on Monday night. Sure can.

So yesterday I once again did the 1.5 hour drive into the Barossa Valley for my first paid farm work. All the harvesting on the vineyards is done with heavy machinery and the first task of the night was to get the tractors and trailers from the farm to the block where we’d be working. I was driving a ute with flashing lights and a big ‘oversize’ sign ahead of the tractors. Too easy.

From what I know so far the actual work is done by four people. One in the harvester, two in the tractors with the trailers and one walking behind the harvester checking if all fruit is picked and adjusting the machinery if necessary. For the first hour or so I was walking with Jim and he gave me an overview of how the work is done. I wondered why the job ad said ‘must be fit and healthy’ – now I know.

Then it was my turn to get on the tractor. It’s a big 4t thing and completely different to the tiny old one I was driving on the farm in Yass. First part of the job is to drive parallel to the harvester so the fruit it picks falls into the tractors trailer. It’s not too difficult although keeping an eye on the trailer while steering the tractor through the narrow gaps between the grape rows is more challenging than slashing a paddock.

The real challenge comes at the end of the row. On a ridiculously small area the tractor and trailer have to be turned around and steered into the next row. With the help of separate foot brakes for each wheel and a hand accelerator it’s possible but not easy as it needs to be done fast so that the tractor with the harvester doesn’t crash into the trailer. 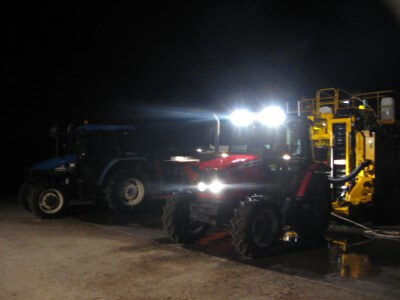 Once the trailer was full of fruit (2-3t) I had to drive it to a nearby truck, weigh the load and chuck it into the truck. For that purpose the part of the trailer that holds the fruit can be lifted up and tilted. I think there’s more controls in that tractor than in an airplane.

Several hours later the truck was loaded with about 25t of grapes and we headed back to the farm. After the machinery was cleaned I asked Sean if there was anything else to do. ‘Yes, drink beer’ was his reply. So we sat for maybe another 20 minutes with a cold one before heading home. It was about 1am by then and I still had to drive back to Adelaide.

Most of the 1.5h drive just sucked as it was raining cats and dogs but finally I got home.

I’m not totally sure of what to think of the job. It’s certainly heaps better than hand picking but if I have to do it for 16 hours it could be horrible too. Also the work is not guaranteed and it might be mid April until the work is done. That would interfere with my plans of selling the car in Melbourne in late March but then again if the work is good it’ll earn me about five grand and free me of monetary concerns for the next 2-3 months. I also need to figure out where to sleep near the farm if there’s a couple of days work in a row. Driving from and to Adelaide every day is just not an option.