I started my day early with a visit to the local market. They have a speciality here that I wanted to try (Kaow Yum, rice with herbs) and apparently it’s more of a breakfast dish. The market is located centrally in town and just a short drive from where I’m staying.

After making my way through the veggies department and the fish merchants I reached the ‘food court’ area. Before I could hunt down Kaow Yum the market stopped for a minute while the national anthem played. They do that every morning at 8 (as well as at 6pm) and everybody is expected to stand still. Most people do but those that have a load of food in the pan or are otherwise urgently engaged are kind of excused.

Kaow Yum turned out to be an interesting dish but I wouldn’t necessarily call it my new breakfast favourite (curry is much better). The coffee was hot and strong, no complaints there. 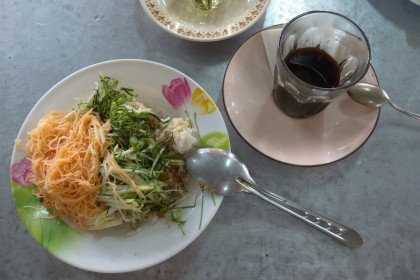 Next to me sat an older guy with two women. He was Muslim so I can’t say whether they were his wifes. He had a very genuine smile and tried to convince me with finger-pointing and head-nodding to try some banana-leaf wrapped stuff that was offered on a plate on the table. I didn’t took much effort on his side and the stuff was worth a try, sticky rice with some kind of fruit yam on top. I really like experiences like that – no words, only smiles and gestures and in the end a good result. 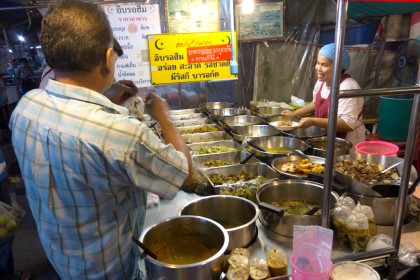 A lot of the dishes are spicy (always pointed out by the sellers) and I got a grasp on how to eat that stuff: Slowly and don’t let it touch your lips. Sounds too difficult? Maybe, but it’s so worth it, the food is as delicious as it is hot.

Also went to the beach in Rai Leh today, more on that later. 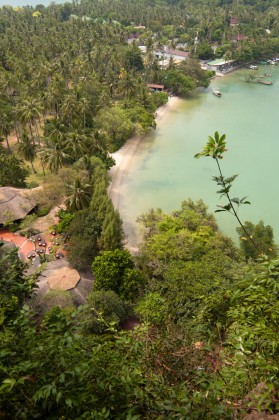