Handling money in Cambodia is an interesting thing. Cambodia is one of the few countries where two currencies are used side-by-side and in the same transaction.

The local currency, Riel, is close to worthless with 4000 Riel to one dollar US. Like other currencies in the area (Kip, Dong) it is only useful in its country of origin and attempts to exchange it elsewhere are usually futile.

What many people don’t know and what the money changers at the border don’t want you to know is that the USD can be used in every Cambodian city. And it’s not just accepted, prices are quoted in USD in every place that is remotely in touch with foreigners. ATMs dispense USD, not Riel.

The Riel comes into play when fractional amounts need to be paid. There are no USD coins in circulation and instead the local currency is used. Paying for a $1.25 meal requires a dollar and 1000 Riel.

The smallest note in circulation is 100 Riel, roughly equivalent to 2.5 cents US. As even a small bottle of water costs 500 Riel, I got most of my 100 as change when shopping at the local equivalent of a 7/11. In uncirculated condition it is a nice souvenir (I have a dozen or so as bookmarks) and in the western world you probably couldn’t print a note like that for 2.5 cents. 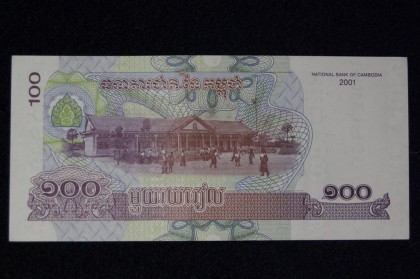 Things get ugly when notes are used. In Cambodia I came across some of the dirtiest and filthiest money I ever laid hands on. Money doesn’t stink? It does in Cambodia and sometimes it made me wash my hands in the bathroom before touching any of my private parts. I always gave such notes to the beggars – don’t think they care too much.