Reliable and efficient public transportation, high-speed internet, it’s nice to be back in the civilised world.

I said goodbye to Auckland and my Scottish neighbours over a glass of wine and a nice dinner with cheese crackers and filled chicken.

In the morning I took the airbus express to the airport and to be fair, this piece of Auckland’s public transportation works well. Guess you can expect that at $16 for a single ride. Check-in was the slowest I ever experienced, it took the Jetstar crew 40 minutes to check in the 40 people in front of me. And that was with four counters open.

Slightly annoyed I cleared immigrations just to find out that the flight would be half an hour delayed. Oh well, what’s 30 minutes if you fly for 11h. 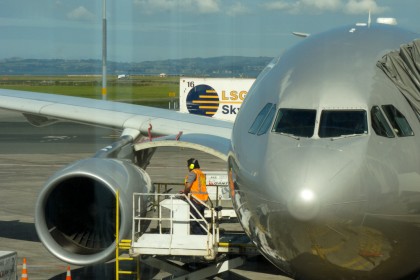 Just when I was heading to the gate, my phone rang. It was the agent I had last been in touch with, asking if I was still looking for a job. Strange timing.

The flight was quiet and smooth and for a few hours we were flying over good old Oz. So close and yet so far away.

We approached Singapore in the late afternoon and when the plane rocked through the dense tropical clouds, the plane was filled with that typical nervous silence. Approaching Singapore is always an impressive sight with hundreds of ships lining the coast and at night a sea of light illuminating the city skyline.