After one week in Port Douglas I came back to Cairns on Monday. My job hunt was not successful unfortunately. The restaurants in Port Douglas are quite expensive and looking for experienced staff. I’ll probably not hear back from the restaurants where I dropped off my CV but you never know. Port Douglas ist definitely too expensive to spend more time there so I returned to the Tropic Days hostel.

Even though I didn’t get a job I had a nice time in Port Douglas. I spent a lot of it on the beach either reading or just listening to some music. Even got out of bed at 6am one day to see the sun rise.

It was a little more difficult to get in touch with people there as the place was more a motel where families and all kinds of travelers stay but not many backpackers in my age. About halfway through the week I met Liz from Chicago, a nice girl traveling through Australia for a couple of weeks with two friends of her. It was really nice spending some time with her. I think she’s the first American I could talk to without being annoyed by an “I’m American, I’m great” attitude a lot of them are carrying around.

The last days the weather was pretty cloudy and stormy. Reminded me of the family holidays on a Danish North Sea island. 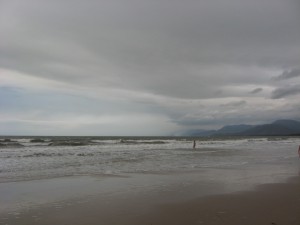 It was a little warmer of course. This is still the tropics and even on cloudy days the temperatures are in the high 20s and the air is so humid you basically start sweating the moment you leave the shower.

The weather was a good opportunity to walk up Four Mile Beach without getting sunburned to death. The strong wind got a lot of kite surfers out on the water. At peak times about 20 of them. Surprisingly they managed to get along without any collisions.

On Friday (July 3rd) I treated myself with a tour to Mossman Gorge (more on that later) and on the way the bus driver told us some interesting facts. When you leave Cairns going north you kind of leave a bit of civilization behind.