Aussie culture is often described as evolving around three things: footy, beer and barby. As I already experienced and enjoyed beer and barby I wanted to give footy a try as well.

Melbourne is the uncontested sports capital of Australia and as such the perfect place to see a live football game. With 11 of the 18 premier league AFL teams based in Melbourne it’s not hard to find a game but rather to choose which one to see.

Having no clue about the game whatsoever I asked the local couchsurfing community for advice. Promptly I got an invitation for the Sunday afternoon game, Collingwood vs Western Bulldogs. Amber, a Canadian who went down under to live with her partner, was to take her nephews to the game and had a spare free ticket for me. Sweet!

Venue for this game was the Melbourne Cricket Ground (MCG). With 100,000 seats it is the largest of the Melbourne stadiums and roughly twice the size of an average Bundesliga stadium. 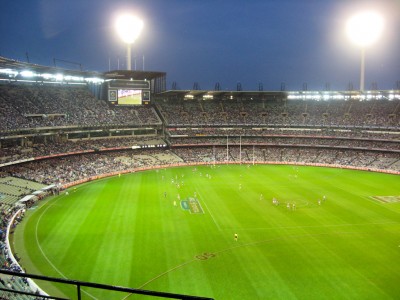 At half three I met with Amber at the stadium, got my ticket and we went inside. Being used to extensive searches by the security in Germany I approached the local security guy and got a surprised look. Apparently they only check your bags here, whatever you have in your pockets is good to go.

The next surprise came when we went up to the block where we had our seats. The whole crowd was colourfully mixed, Collingwooders sitting next to Bulldogs. Except for a small part of the stadium the whole area doesn’t have anything like fan blocks. I think that’s absolutely remarkable, tens of thousand of sports fans sitting next to each other and cheering for different teams without trouble. Kudos.

At 4:40 was kick-off to my first football game ever. Aussie rules football fortunately has little in common with the American sport that goes by the same name. The game is fluent and doesn’t have more free kicks than a Bundesliga soccer game. A match lasts about two hours divided into four quarters.

During the game I got a solid introduction to the rules from Amber. She even knows all the players by name and her commentary reminded my of watching a soccer game with my father. Just without the swearing that is.

When it comes to atmosphere the game I saw today couldn’t compete with a soccer game. Maybe it was the weak attendance (54,000), maybe the stadium is just to big or maybe its due to the fact that fans in Germany have a different mentality. The mentality that nurtures the 90 minutes of singing and shouting but also creates the need to keep the fans in separate blocks.

Nonetheless the atmosphere was still great and I had a really good time there. Nice to smell stadium air again.