When I was younger, I never had much interest in watching any kind of road-racing. WRC was ok for me but Formula 1 was incredibly boring and Nascar even worse. Things changed when I started to develop an interest in motorcycles. Suddenly there was the world of MotoGP, where riders were fighting fierce battles, sometimes overtaking each other several times a round.

Since the 1950s, my hometown hosts an annual motorcycle road-racing event. For that, part of the local harbour is closed down and turned into a racetrack. Admission is cheap and the whole atmosphere relaxed. 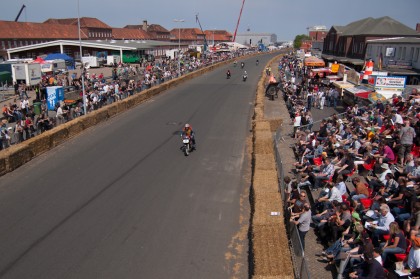 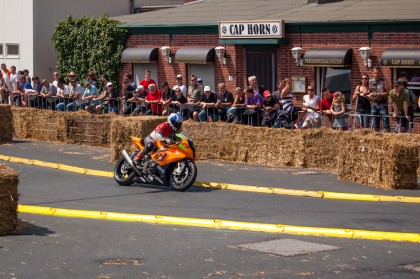 So far I haven’t been in town when the race took place but this year I was. Not only was I interested in watching the event, it also promised to be a great photo opportunity.

One reason why I like watching motorcycle racing is because it is so dynamic. While a F1 driver just sits in his car, a MotoGP rider has to use his whole body to bring his vehicle through turns at high speed. 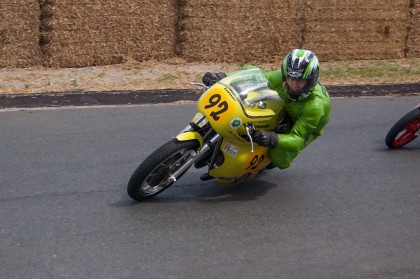 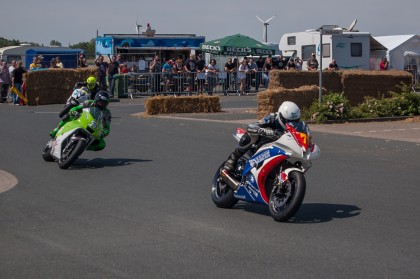 At the local race, the whole area was open to the public, including the paddocks, where drivers prepare themselves and their bikes for the track. Some of the guys were past 50 and so were their bikes. 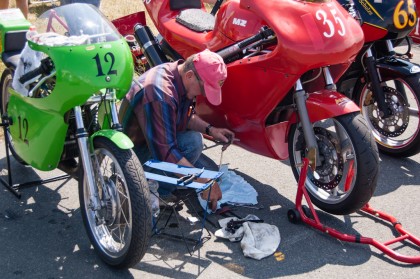 The range of bikes was extremely wide. They were participating in ten different classes, some for old-timers, some for modern 600cc sports bikes and another for side-cars. Especially the later were a lot of fun to watch. 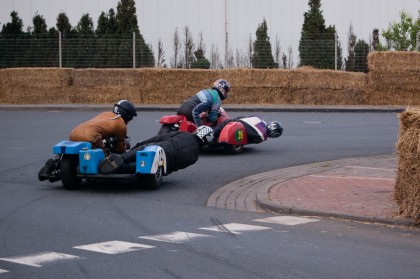 Also fun to watch was the merchants area, set up in the middle of the course. Pretty much every manufacturer had a stand here, trying to convince the spectators of their products. 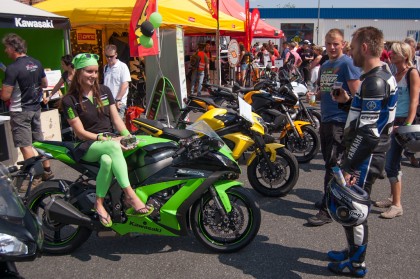 Seeing all these bikes and watching their riders hammer them around the track was a great experience. I think one needs to ride a bike to understand how much harder it is than driving a car.

In 2010, MotoGP champion Valentino Rossi (“The Doctor”) was invited by Ferrari to test-drive their 2008 F1 car on the Valencia racetrack. Within a day he was close to the lap record that the F1 professionals had put down in 2008. Ferrari offered him a contract but Rossi declined, saying F1 was too boring, compared to MotoGP.

Michael Schuhmacher tried to go the other way, from four to two wheels, when he finished his career in 2010. He never got close to scoring any impressive times but instead crashed repeatedly and ended up hurting himself badly. Not too surprising, considering that breaking a motorcycle means decelerating 200kg of steel and plastic on a part of the wheel that is roughly as big as a palm.

While I was watching the qualifications, three guys ended up with their bikes on the tow truck. Fortunately nobody got hurt too badly. It is, after all, considered a fun event and not a championship run. From what I could tell, riders and crowd alike had a good time. 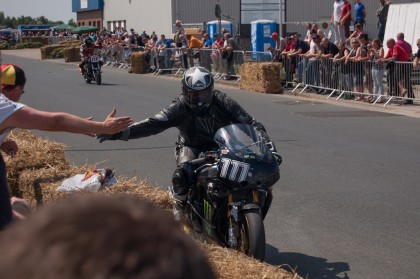