It’s incredible, how dusty this city is. Blowing one’s nose is not a pretty sight around here. Dust masks are common in people’s faces and from what I’ve gathered so far, it’ll be a while before the next rain brings relief. 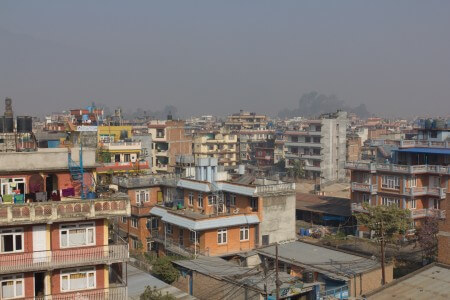 Despite the dust, everything in Kathmandu is pretty colourful, especially the clothes. While the dust is annoying, the dry weather has the big advantage of being far less tiring than the moist heat of Southeast Asia.

As Nepal sees only a fraction of the tourists a country like Thailand encounters (more than 20 million vs roughly half a million), everything touristy seems to be a bit more relaxed. Touts spark up a chat instead of going straight for the “Hello Sir tuk-tuk” you hear twice a minute in Bangkok.

In terms of development, what I’ve seen so far reminds me of Myanmar. There are no supermarkets around, no chain stores. The streets are lined with small shops, operated by what I assume are the business owners. I think it’s a pretty cool thing, as it makes interactions with people so much more vivid. In an Aussie supermarket, the cashier doesn’t really care about my shopping experience, but in a small shop it’s the owner’s reputation on the line. 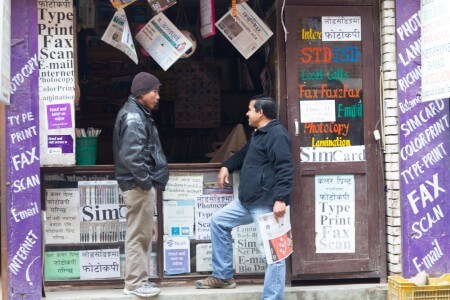 Before leaving Germany, I bought most of my groceries at smaller shops and only went to the supermarket for things like bog rolls. Aside from the much better quality in produce, it was also a much nicer experience. Sometimes people say it’s sad how all the small corner stores have died off. But I guess unless we decide to buy as responsibly as possible and not as cheaply as possible, that is unlikely to change.