On Sunday some people from my friend’s company went on a wine tasting tour to Barossa Valley and I was invited to join them. There were around 30-40 people and we had a coach organized for us. The bus driver was a really relaxed and funny guy: “Hey everybody, welcome to the tour. My name is Dis but if you forget that, ‘Hey you!’ is totally acceptable.”.

Barossa Valley is a major wine producing area in Australia and located around 60km north of Adelaide. A lot of German people settled there some 150 years ago and today a lot of the places still have German names. 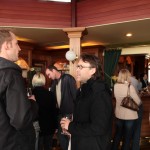 The ride to the first winery took us about an hour and we were welcomed by a friendly guy who gave us a short introduction and some guidelines for feedback on the wine: “If you don’t like the wine, ‘uh yuck’ is considered rather offensive. We prefer a subtle ‘this is not really to my taste’.”.

We had about half an hour to try more than a dozen different wines including some really nice Shiraz. After stopping at a second place we headed to Tanunda for lunch (Schnitzel, chips and beer). 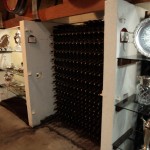 The weather had changed by then and rain started pouring down. We visited another winery that also brewed beer with grapes, no tasting unfortunately.

The last stop was Seppeltsfield where we got to taste some pretty old port wine. Not bad but not really to my taste. Somewhat over an hour later we where back in Adelaide and finished the day off with dinner at an Indian place.