Getting around in Germany is an easy thing to do, thanks to a railway network that is considered to be one of the best in the world. On long distance trains one doesn’t even need to speak German as the conductors announce all stops and connections in English as well. Usually with an accent that is so thick it’s almost a new language.

The most fancy way of travelling by rail are the ICE trains connecting the major cities.

They go as fast as 300 km/h (on selected routes) and if you’ve just come off a flight from Asia, the interior looks like a living room. That obviously comes at a cost. A single second class ticket from Hamburg to Munich costs EUR 135 (USD 170) and slower trains are only slightly cheaper. First class tickets are twice the price.

Booking well ahead can save a lot of money as a limited amount of tickets is available for as little as a quarter of the regular price. There are discount cards (25, 50 or 100% off the ticket price) as well but these are expensive and only worth it for people who use the railway a lot. 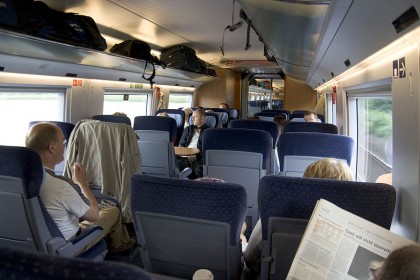 The German railway has a reputation for being extremely reliable and on time. That is the perception of foreigners though, Germans usually use less favourable attributes.

One reason for the bad reputation, the railway has with its domestic customers, is the high standards these expect. The 3:42 is pulling in at 3:44? Delayed! Again!

Most Germans probably wouldn’t believe that about 90% of the trains are at most ten minutes delayed. It’s those 4h delays on public holidays that people keep in mind. Main reasons for the delays are a network that is at the upper end of its capacity, technical failures and the occasional suicide (about 800-900 per year).

Things can get nasty when you have to depend on connecting trains. Which you will, unless your itinerary includes only major cities. Connection times can be as little as five minutes which means that an eight minute delay can cause you to miss your train and have you wait for an hour or more at the station. And unlike Singapore International, these are not places where you can enjoy being stuck.

Compared to other countries, the German railway is still providing an exceptional service. Frequent trains that arrive usually on time and are in very good shape – you get what you pay for. 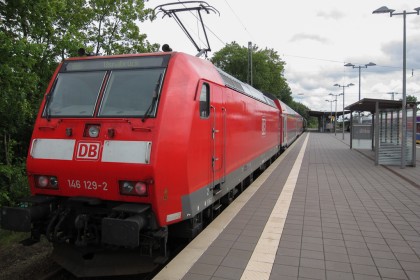