Since of earlier today, my motorcycle is once again registered and ready to (legally) drive around on Germany’s roads. It hasn’t been easy though. This is the story.

It started last Wednesday when I got the bike out of the basement – equipped with a nice new battery – and went to get a safety certificate. These certificates are mandatory and need to be renewed every two years. Mine was thus long expired.

The bike is in good shape and I never had any trouble getting a certificate for it. I didn’t expect any trouble this time but that was foolish. The guy who was to handle my bike at the vehicle inspection station (TÜV) was an apprentice. These youngster need to prove to their masters that they are worthy of their craft and check everything 110%.

Here’s famous German cartoon star ‘Werner’, trying to get his ‘sausage blinker’ registered. Gives you an idea of the inspectors’ twisted minds.

When that rascal checked the suspension of the rear wheel, he found fault with some minor play in one of the bearings. Hardly noticeable but he called for his masters and had them check it too. Their verdict was shattering: no safety certificate.

Great, now I had to get the bike to a garage to have it fixed. That’s where more trouble came into play. As my bike was not registered, I was not allowed to drive it to a garage, unless I had some special paper granting me permission.

Yesterday I headed to the next registration office to get that paper. There was a lot of people waiting in front of me and pulling number 109 when 65 had just been called was not a promising sight. After an excursion to a bakery across the street and a lot of sitting around, my number was finally called.

The clerk was your average ‘I don’t like my job and I have no trouble showing it’ type. I explained what I needed and he had to check with his co-workers twice before he knew what to do exactly. I had to pay the full registration fee and a new license plate but some 15 minutes later I had the paperwork settled. Why a new license plate? My old one was a seasonal one, allowing me to drive from March to October only – yet now I wanted to have one that allowed me to drive all year round.

Next stop was the mechanic. I showed him the bike, told him what was apparently wrong with it and he asked me whether I was serious. He told me the play in the bearing was so minimal, it shouldn’t be reason to deny me the safety certificate. At that point I was ready to bang my head against the nearest wall. Or better the head of that gnome from the checkpoint who had my bike fail to impress his masters.

The mechanic promised to have a look at it and present the bike to a guy from the vehicle inspection agency, who was coming to their shop this morning. He did just that and at half ten I got a call from him: ‘Good news, your bike’s got a safety certificate now.’.

I jumped onto the next tram and headed over there. He told me he had inspected the bearing and it was close to mint condition. He had loosened some screws, turned the bearing by 90° and tadaaaa, the play was gone. It’ll be back sooner or later but what do I care.

Now that the bike was officially safe and roadworthy, I still needed to get it registered. I drove over to the registration office and pulled a number. 128 while 98 was already being called. Yayh.

So everything return, new paperwork, calls to superiors and another fifteen minutes later she brings a new license plate. The letters on it read ‘GV’, which in Germany is a common abbreviation for coitus. I don’t care any more, I just want to get it over with. Had she handed me a license plate saying ‘bumfuck’, I would have taken it.

So much bullshit just because of that little c***s****r from the safety checkpoint.

Whatever, ready to ride now. 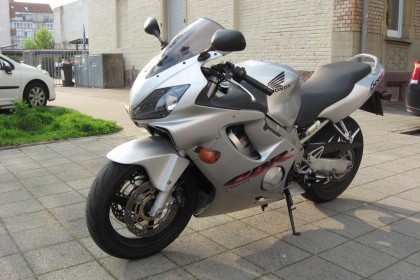 2 thoughts on “How to register a Motorcycle in Germany”