This weekend Hiro’s visa was about to expire and we went to get an extension at the border to Burma/Myanmar. Extending a visa is rather easy (if you’re a citizen of the right group of countries), leave the country, come back half an hour later and get another 15 days (or 30 if you enter the country by plane).

The border crossing that is the easiest to reach is at Mae Sai about five hours north of Chiang Mai. We couldn’t get a bus ticket directly to Mae Sai so we went to Chiang Rai instead to catch a bus to the border from there.

From Chiang Mai to Chiang Rai it’s about 3-4 hours and once again I was amazed by the Thai bus drivers. So far I’m unable to tell on which side of the thin line that divides genius and insanity they are to be positioned.

They might be masters on four wheels, using every inch of the road (including the oncoming lane of course) and getting the last bit of power out of their aged vehicles. They might as well be plain mad, unaware of what happens when two heavy loads of steel collide at high speed. Frankly the fact that I haven’t seen a single accident yet let’s me think of them as masters of their craft. That thought is also more comforting when you’re at their mercy.

The reincarnation-express delivered us safely in Chiang Rai and we had a look around for the bus to Mae Sai. Now while the long distance coaches are somewhat close to what you’re used to from western countries the local buses are a bit different. 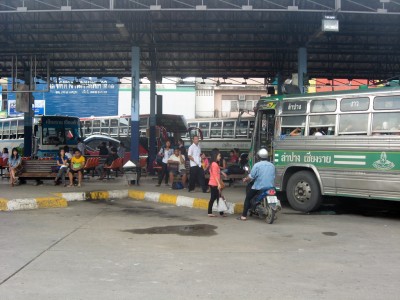 Ever wondered where the old buses go that no-one wants to have on Europe’s roads any more? I know that now. Have a look at the top notch air-con. 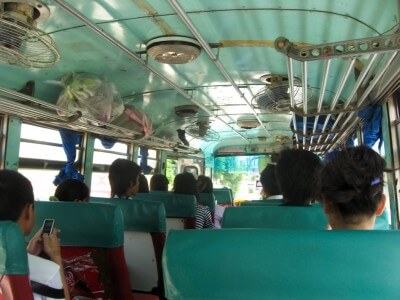 There was up to thirty people in that bus and I was the only one with blond hair. Gives you quite a feeling.

The ride to Mae Sai takes roughly an hour and a half and as the roads are close to the border there is frequent police checkpoints. The police is – as far as I know – mainly looking for illegal immigrants from Burma so when they board the bus to check IDs I’m not exactly in their sights. Yet having people with bullet-proof vests and loaded M16s around makes me feel uncomfortable.

Upon arrival in Mae Sai Hiro headed for immigrations and I went to have a look around. The whole area surrounding the border crossing is a huge market where food and fake designer cloths are on offer. 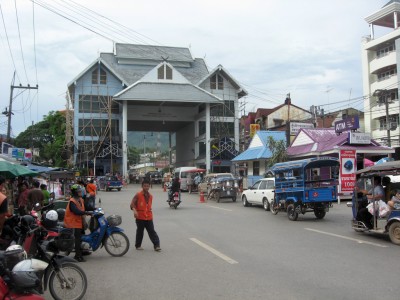 It’s not really a nice place. Like the tuk-tuk drivers in Chiang Mai the dealers here see me and get an expression of greed, desire and hunger on their faces. Think of a catholic priest spotting a choir boy.

I found a restaurant that offered nice food and a view over the bridge that crosses the river separating the two countries at this point. 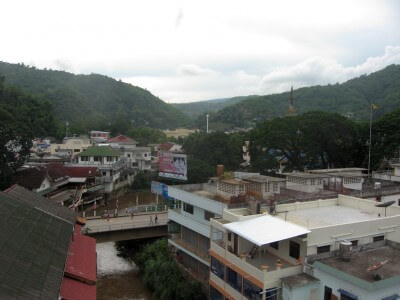 Burma is literally just a stone-throw away. But better not to try that out, don’t want to cause an international incident.

The visa extension went smooth for Hiro and as it was already late afternoon we searched for a place where we could spend the night. We walked away from the main buzz and came through a part of town where kids point at me and shout ‘Farang, farang!’ (the Thai word for western people). What was that saying? Everybody is a foreigner in most countries of the world? Sure feels like it. 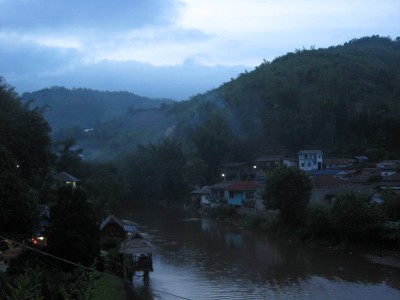 At the end of that road we found a nice riverside bungalow ($10 a night, got to love off season) overlooking the Burmese outskirts.