Walking down the street, I come by one of the many small restaurants and a waitress in front of it says “Hello” and asks whether I’d like some food. I say “No” and hold up a recently purchased bunch of bananas. “Bananaaaaaaa!” she shouts and bends over laughing.

People here are really friendly. And genuine as well, which is a little surprise, considering this place basically lives of tourism. Similar places in Thailand (Koh Tao comes to mind) have long been spoilt by generations of drunken western youngsters, who do their best to disrespect local culture and people.

Maybe it’s an important difference that most tourists in Ngwe Saung are Asian and not western. Or maybe it’s because the place hasn’t yet seen too much of the industry.

Be that as it may, it’s nice to be in a place with so many genuinely friendly people. A security guard I pass in the streets smiles and says Mingalaba, so does a construction worker and many others. All people who don’t have anything to sell to me.

I’ve noticed that it’s changed my attitude as well. In Germany I rarely smile at strangers. If I do, it’s because I feel like having a bit of fun and most people react baffled, albeit in a positive way. In Thailand it’s a bit better but I’m still reluctant because all too many times a smile is met with a response along the lines of “you buy at my shop?”. In Ngwe Saung I smile at strangers all the time.

With locals being so welcoming, I’ve also tried a lot of street food, simply because patrons at the stall said hello and waved. The food in Myanmar (that I know of so far) is good but doesn’t match my taste as well as that in Thailand. Half the food in Yangon is either boiled pork intestines (they LOVE that stuff!) or something deep fried. That being said, they have some really yummy noodle soups and the chicken curry I had for lunch was impressive as well.

Just as in neighbouring countries, street food is the way to go if one likes to cut down on expenses for food. Most dishes go for something like 500 Kyat which is under half a dollar. 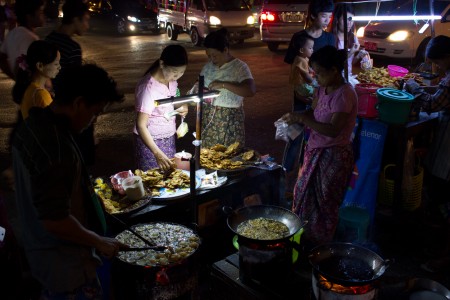 Myanmar has a reputation for being an expensive country, but I think that is only partially true. Accommodation is indeed expensive, but with supply growing, prices reach a more realistic level. The $35 my current twin room in a bamboo bungalow cost is quite a lot. On the other hand the $13 dorm bed in Yangon was “you get what you pay for”. The $25 hostel I stayed at first, was one of the nicest I’ve ever stayed at.

Transport can be had cheaply as well. When Hanny took me to see the pagoda in the river, we each paid 400 Kyat for the 1h bus ride. Prices suddenly inflate though whenever a clearly touristy destination is near. The boat we took after the bus (not even five minutes across to the pagoda) charged 5000, simply because I was a westerner. Locals probably pay a hundred or two.

So yes, in parts Myanmar is expensive but it’s by far not unaffordable. And it’s well worth it, what with all the friendly people around!